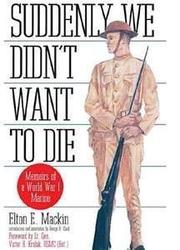 BIOGRAPHY & MEMOIR
Released: Nov. 1, 1993
SUDDENLY WE DIDN'T WANT TO DIE: MEMOIRS OF A WORLD WAR I MARINE
by Elton E. Mackin
BIOGRAPHY & MEMOIR
Released: Nov. 1, 1993
SUDDENLY WE DIDN'T WANT TO DIE: MEMOIRS OF A WORLD WAR I MARINE
by Elton E. Mackin
A real curiosity: a highly mannered WW I diary, published nearly 80 years after being written and 20 years after its author's death. Mackin (1898-1974) entered WW I in June 1918 as a 19-year-old Marine infantryman. He was immediately thrust into the front lines. The ``Boche'' crouched a thousand feet away, on Hill 142 in the Belleau Wood of France; it was the job of Mackin and other raw boys ``full of restlessness and spice'' to win the hill and then the war. They did—although not, as this stylish diary makes clear, without exposing themselves to unspeakable horrors. Mackin, who refers to himself in the third-person as ``Slim,'' plunged into the action by volunteering for the ``suicide squad'' as a ``runner,'' a man who steered soldiers into the front lines. Within days of arrival, he'd killed his first German, recounted in a passage that reveals the art, sometimes strained, that marks the diary: ``He reached for the tool of his trade. It came up, fitting in snug comfort like the arm of a pal. Its smooth stock caressed him from shoulder to cheekbone. Habit? Training! Target—the half-drawn breath—a finger pressure—recoil.'' Sometimes a young man's lyricism takes over: ``We lay close-hugged to the earth, breathing the reek of mother soil and the mystery of night.'' Bright snapshots abound, like the one of Skipper: When shot in the neck muscles, he unbuttons his collar, cleans the wound with his finger, buttons up again, and returns to work. The horror of war never departs: rain of bullets, threat of mustard gas, corpses sprawled in trees. Mackin didn't fulfill his literary potential; after the war, he worked as a laborer, bus driver, appliance-store owner, and custodian. What a shame: the diary has the faults one expects, and the promise one prays for. A fine addition to WW I literature. Read full book review >