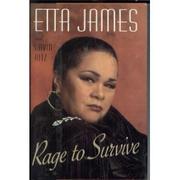 BIOGRAPHY & MEMOIR
Released: June 1, 1995
RAGE TO SURVIVE: THE ETTA JAMES STORY
by Etta James, David Ritz
BIOGRAPHY & MEMOIR
Released: June 1, 1995
RAGE TO SURVIVE: THE ETTA JAMES STORY
by Etta James, David Ritz
A better-than-average up-from-the-ghetto, as-told-to life story by the R&B diva. Born Jamesetta Hawkins in 1938 in Los Angeles, her remarkable voice won her a featured soloist spot at the local church when she was just a child, and she'd barely hit her teens when she was discovered by L.A. promoter/songwriter Johnny Otis, a Greek man whose soul ``was blacker than the blackest black in Compton.'' Otis gave Etta her stage name and oversaw the recording of her first hit: ``Roll With Me, Henry,'' a double-entendre answer song to the Hank Ballard hit, ``Work With Me, Annie.'' From there, she hit the road, mostly playing small southern towns where she encountered racism at every turn. Her pungent observations about her peers make for amusing reading: Little Richard ``called himself King Richard and would get mad if you didn't recognize his royalty''; James Brown was ``a little dictator, an arrogant lord over the world of his music''; Jackie Wilson ``was incapable of talking about anything but Jackie.'' James also chronicles her regrettable talent for selecting men who used her at best, physically abused her at worst, and an addiction to heroin and other drugs that took her decades to shake. Musically speaking, James's life has also been one of ups and downs. Never quite achieving mainstream success, she moved from pure R&B to light jazz, pop standards, and out-and-out rock 'n' roll in the late '60s and '70s, then returned to form as a funky blues shouter in the '80s. James is well served by coauthor Ritz (Take It Off, Take It All Off, 1993, etc.), who ably captures the singer's feisty tone and does a reasonable job of keeping the narrative moving along. Not exactly an uplifting story, but plenty of sex, drugs, and rock 'n' roll to keep the fans happy. (8 pages b&w photos, not seen) (Author tour) Read full book review >