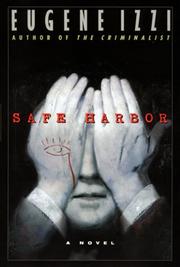 MYSTERY THRILLER
Released: Aug. 3, 1999
SAFE HARBOR
by Eugene Izzi
MYSTERY THRILLER
Released: Aug. 3, 1999
SAFE HARBOR
by Eugene Izzi
Originally published in 1995 in the UK, this typically dark Izzi psychothriller makes its US debut posthumously. That Tommy Torelli was a stand-up guy everybody from mob boss Pete Papa on down took on faith. Tough, stoical, he never whined, never complained, and the idea that he might rat to cut himself a deal was laughable. And yet somebody who certainly should have known better got antsy. There was Tommy in police custody, and inexplicably Pete Papa decided extra pressure was warranted. So the word came down to Tommy—blow the whistle on your friends and you can blow taps for your kid. Bad mistake. Tommy's love for Mario, his baby son, was ferocious, limitless. A threat to the child and all bets were off. To whisk Mario out of danger, Tommy made a beeline for the FBI's Witness Protection Program and pulled its camouflaging blanket over both their heads. Suddenly, mobsters all over New York were going to jail as the result of Tommy's information, and one—a very special case—met his death. The thing that made Terri DeLayne so special was James Bracken, world-class buttonman. Terri and Bracken were lovers. Fifteen years (and maybe fifty killings later), Bracken was still searching for Tommy, his all-consuming need for vengeance undiminished. But Tommy, now Mark Torrence, respected citizen, dedicated Chicago youth worker, devoted husband was in a "safe harbor." Still, his eyes remained "vacuum cleaners, sweeping the streets." Because no one had to tell him that the Torelli persona continued to cling, that retribution had legs, and that Bracken was out there somewhere. This is the second (after The Criminalist, 1998) of Izzi's novels to be published after his death in 1996. As always, you get few of the graces, plenty of story, and some scenes of undeniable power. Read full book review > 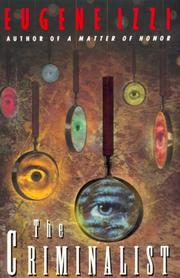 MYSTERY THRILLER
Released: Oct. 1, 1998
THE CRIMINALIST
by Eugene Izzi
MYSTERY THRILLER
Released: Oct. 1, 1998
THE CRIMINALIST
by Eugene Izzi
Grim but absorbing thriller, in which a family torn apart by a brutal murder endures a replay 20 years later. Before the murder derailed them, two of the three Moran brothers were doing all right. Terry was a rising young cop, Tom a well-regarded young medical student. As for Frank, the oldest, his dance toward alcoholic oblivion was still no more than a minuet. But then somebody kills Nancy, Tom's wife, in an act of singular violence. In the aftermath of this horror, both Terry and Tom find themselves suspects. Since the evidence is flimsy, the two are cleared soon enough, but suspicion lingers, blighting their lives and crippling their ambitions. Still, they are managing to some degree when, on the 20th anniversary of Nancy's death, a young woman is killed and mutilated in ways that can't help but recall the earlier crime. Has Nancy's killer suddenly surfaced, or do the police have a copycat on their hands? Homicide Detective Dom DiGrazio (the criminalist of the title) thinks it's the latter. Some of his superiors want him to be wrong, though, and at this point departmental in-fighting takes center stage as career-minded cops battle for the tactical edge that translates into promotion. DiGrazio is a savvy politician'sneaky, fast, unashamedly opportunistic—and Izzi (Tribal Secrets, 1992, etc.) clearly relishes his triumphs over the fat cats in blue. At length we get back to the killer, who finally makes a fatal mistake. It leads to a climactic struggle, set fittingly in an insane asylum, at the end of which the forces of good are bloody but unbowed. Though a bit repetitious at times and occasionally clumsy, the energy is unflagging. Izzi, who died in 1996, never qualified as an elegant writer. But over the course of a dozen or so novels, he was a storytelling machine. Read full book review > 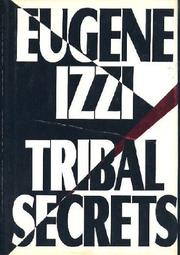 FICTION & LITERATURE
Released: Sept. 15, 1992
TRIBAL SECRETS
by Eugene Izzi
FICTION & LITERATURE
Released: Sept. 15, 1992
TRIBAL SECRETS
by Eugene Izzi
Where Izzi's Prowlers (1991) was operatic in its emotional intensity, his newest crime thriller is more soap operatic—a relentlessly grim farce about mobsters, madmen, and the family ties that bind. That Izzi is off his usual stride is apparent right from the strained start, seemingly grafted from a pulp psychothriller, that finds Edna Rose, a victim of parental sexual abuse now grown into an obese bag-lady with bucks, fantasizing about the day she'll confront her hero—fast-rising TV-star Babe Hill—and seduce him. But Edna's showdown with Babe lies many pages away, and before it Izzi tracks two others whose ``tribal secrets'' are shredding their lives. The more peripheral is sleazy Jerome Spinell, whose first appearance sees him nearly thrown from the 45th floor of an L.A. hotel by henchmen of his brother Milo, a Chicago godfather. Milo's beef is that he invested, on producer Jerome's advice, $1.5 million in Babe's TV-pilot Street Babe, which scored record ratings—and now Babe is telling the Spinells to take a hike. For Babe's struggle with his own family—the bleeding heart of the novel- -reveals his hatred of mobsters and hinges on childhood savageries inflicted on him by his mobster-dad, Johnny Hilliard, and mom. The two family melodramas connect when Milo, by threatening to kill Johnny, tries to blackmail Babe into signing for a TV series; and crazy Edna joins the fray when she throws herself at Babe just when one of Babe's brothers, a scene-stealing psychopath, decides to kidnap his star-sibling for ransom. But here comes Babe's soul- tribe—wife Kelly and cop/best-pal Tim—riding to the rescue.... Izzi's poignancies and many sharp vignettes of the criminal life are overwhelmed by his contrived plot and his self-absorbed hero: Here's a thriller that aims to tackle important issues but winds up, despite moments of real power, being mostly self- important. Read full book review > 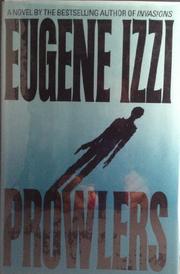 MYSTERY THRILLER
Released: June 17, 1991
PROWLERS
by Eugene Izzi
MYSTERY THRILLER
Released: June 17, 1991
PROWLERS
by Eugene Izzi
An aging con faces down a greedy mobster in Izzi's fifth, masterful Chicago crime-thriller (Invasions, etc.). Robert ``Catfeet'' Millard is the likable burglar (``prowler'') now free after serving 28 months for refusing to rat to a grand jury on amoral mobster Darrin Favore—only to learn that Favore has ``kept the meter running'' on Catfeet's $22,000 gambling debt, which now totals a whopping $3.6 million. To get Favore off his back, Catfeet turns to mob boss Salvatore Lucchesa, who agrees to speak to Favore—and drops dead on the spot. Now without protection, Catfeet seeks out the two people who love him: Favore's secretary and unrequited lust-object—the source of his hatred for Catfeet—upscale black beauty Femal Tyler, who turns Catfeet inside out when she surprises him with a baby daughter; and Catfeet's adopted son, Charlie Lane, a reformed ex-con who, faced with a shrewish wife and a dead-end job, is once again listening to call of the streets. Also woven with a rhythmic hand into the fierce tapestry are Favore's sadistic nephew, Merle Como, sicked onto Catfeet by the mobster, and idealistic cop Dick Blandane, whose battles with his racist colleagues provide a right-side-of-the-law counterpoint to Catfeet's war with Favore. That war reaches a bitter end as, drunk and desperate but honorable to the last, Catfeet turns cold on Charlie to keep the youth from going after Favore, then is beaten to death by Merle. Finally it's up to Femal and Charlie to avenge Catfeet—which they do with style but not without penalty, as Charlie is arrested by Blandane and Femal must flee to Africa. Hard, smooth, and dark: Izzi at last clears out his Elmore Leonardisms and sings in his own voice a strong and sad song of the streets. His best book—and positively operatic. Read full book review >