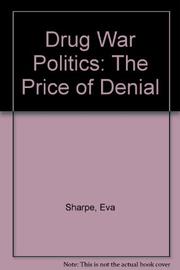 NON-FICTION
Released: July 1, 1996
DRUG WAR POLITICS: THE PRICE OF DENIAL
by Eva Bertram
NON-FICTION
Released: July 1, 1996
DRUG WAR POLITICS: THE PRICE OF DENIAL
by Eva Bertram
A scholarly attack on America's drug policy. The authors of this tome, all public policy analysts or academics, study the history of the current war on drugs and conclude that it has been misguided from its inception. The question of drug use, they argue, is a public health issue, not the moral quandary that so many politicians claim it to be. Despite their doctoral-thesis-like approach, the authors make fascinating points about America's complex relationship with drugs: In the 1897 Sears Roebuck catalogue, for example, a kit containing syringes and a vial of morphine could be had for just $1.50. By 1914, laws were in place to control drug use. But these early laws did not prevent drug use; they merely restricted it to those who purchased it from a physician ``in good faith,'' and records were kept of all such transactions. This tolerance, however, had worn thin by the Nixon era, and it was at that time, the authors write, that America's real trouble with drugs began. From then on, America has pursued the zero-use goal typified by the ``Just Say No'' campaign. The costly Pyrrhic victory of the drug war has indeed lowered the number of drug users, but the authors note that only casual use has dropped; the number of intravenous drug and cocaine users, who are responsible for 80 percent of the costs associated with drug use, has skyrocketed. The authors conclude that the zero-use model is outdated and that the war on drugs should be refocused to a war on the roots of drug use—poverty, poor health education—and a change in our culture's heavy reliance on licit drugs to cure our ills. Compelling arguments and an excellent use of data make this report invaluable in an election year. (For two more studies of the drug wars, see Dan Baum, Smoke and Mirrors, p. 653, and Jill Jonnes, Hep-Cats, Narcs and Pipe Dreams, p. 728.) Read full book review >