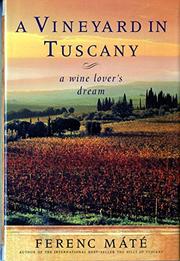 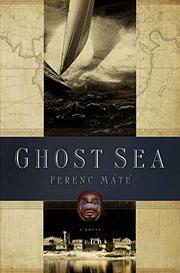 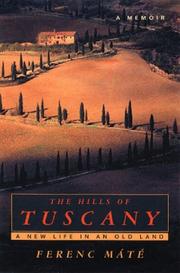 NON-FICTION
Released: Nov. 12, 1998
THE HILLS OF TUSCANY: A NEW LIFE IN AN OLD LAND
by Ferenc Máté
NON-FICTION
Released: Nov. 12, 1998
THE HILLS OF TUSCANY: A NEW LIFE IN AN OLD LAND
by Ferenc Máté
This volume takes the author (A Reasonable Life, 1993) and his artist wife into the sensuous heart of Italy and urges them to stay against the comic and idiosyncratic odds that MatÇ calls the Italian way of life. Tourists in search of a break from the pressured rituals of New York, the MatÇs alight upon the area around Montepulciano, begin house-hunting in earnest, and fall upon a sort of paradise that they turn into home at last. All of this is superimposed against the backdrop of Tuscan seasons, rituals, and rustic anecdotes—which are far more interesting than any of the author's reflections upon them. MatÇ never crosses that great cultural divide that hangs like a mist between traveler and native, keeping his real subject (Tuscany? himself?) forever at bay. Almost 100 pages of his memoir are devoted to the comic surprises of house-hunting and its incumbent bureaucracy, in which MatÇ rarely steps outside of pure caricature. Blissful about his marriage, rapturous about food and wine, MatÇ spends considerable time describing the sounds of bells tolling in the valleys after lunch, the fluttering of linen, and the aroma of chestnuts heating on a grill. But in the end, his recollections of everything else are little more than hot-air balloons tethered to nothing in particular. Lunches launch and cap the author's foray into this personal paradise and frame the friendships he developed with his neighbors in one dimension. He is more passionately observant about mushrooms, grapes, the flavor of new oil, and the simple rustic life than about the human beings who opened these pleasures to him. They're the missing link that makes one wonder if MatÇ likes his Italian neighbors at all. Tuscany is a most compelling subject for the telling, but Sonoma might have been just as inspiring to this author. At its heart, the hills of Tuscany echo hollow when MatÇ asks to call them home. (15 drawings) (Author tour) Read full book review > 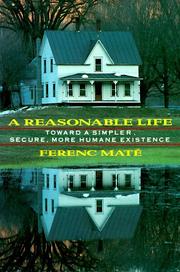 NON-FICTION
Released: Feb. 15, 1993
A REASONABLE LIFE: TOWARD A SIMPLER, SECURE, MORE HUMANE EXISTENCE
by Ferenc Máté
NON-FICTION
Released: Feb. 15, 1993
A REASONABLE LIFE: TOWARD A SIMPLER, SECURE, MORE HUMANE EXISTENCE
by Ferenc Máté
Freelance writer MatÇ's diatribe on the ills of the modern world serves up little in the way of originality, trotting out and castigating well-known villains—with a little too much cuteness and way too much glibness to be taken seriously. MatÇ isn't impressed as he surveys the state of our industrial society. We are desperately short on compassion, love, and vision; we suffer humiliating and trying jobs; live lives of little modesty, wisdom, sharing, or mystery. Our priorities are haywire, our land sacked, lives squandered, alienation complete. MatÇ's prescription is to scale back, to get simple, free, and passionate. His points can make good sense, and he can be engagingly brash. Worse, he can also be insulting, with his humor sophomoric, his sense of history woefully opportunistic, his own high regard infuriating, and his rural romanticism extreme. Does MatÇ really believe that ``in any poor country, where children rarely have a toy, with shacks for homes, rags for clothes, rice and beans year in and out, their eyes glow full of life''? And he won't win many converts when he scolds, ``I realize that most of you will recoil in mortal terror at the mere thought of having torn from you the wonders of the city—Dunkin' Donuts....'' The author casts his net of derision too broadly: We are all caught up in it, regardless of viewpoint or behavior. In the end, more time is spent ranting than envisioning, and a picture of the future never emerges. If MatÇ had been able somewhat to temper his own zeal, he might have claimed his place in the call for a sane world. As it is, his many good points expire as readers leave feeling unnecessarily insulted and confused. Read full book review >