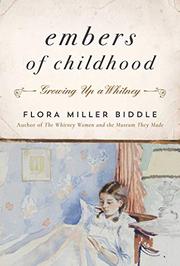 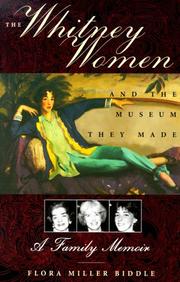 BIOGRAPHY & MEMOIR
Released: Nov. 1, 1999
THE WHITNEY WOMEN AND THE MUSEUM THEY MADE: A FAMILY MEMOIR
by Flora Miller Biddle
BIOGRAPHY & MEMOIR
Released: Nov. 1, 1999
THE WHITNEY WOMEN AND THE MUSEUM THEY MADE: A FAMILY MEMOIR
by Flora Miller Biddle
Biddle, a former president of the Whitney Museum of American Art and granddaughter of the museum's legendary founder, Gertrude Vanderbilt Whitney, here commemorates the illustrious female dynasty of art lovers and the institution they created and sustained. Nowadays an integral part of the Manhattan art landscape, the Whitney was at its inception just a studio on Eighth Street, opened by the sculptor and wealthy heiress. Seeking to support contemporary American artists, she transformed her studio into a full-fledged museum by 1930 and remained its president and most generous benefactor until her death in 1942, when her daughter took over. By the middle of the century, running a museum had become a challenging business, requiring a well-trained staff and a constant influx of money. Reluctantly, the Whitney Museum changed its original policy, focusing less on acquiring new artwork than on interpreting and properly displaying the finest items in its collection. The Museum became progressively more dependent on donations, and an admission fee was introduced in 1966. At the same time, it widened the range of its activities to include lectures, publications, a library, films, and trips abroad for members. When Gertrude's granddaughter became trustee and later president of the museum, it was moved to its present prominent location on Madison Avenue. While painstakingly recording endless fund-raising campaigns and providing an overview of day-to-day management, Miller Biddle also discusses the precarious balance between her private and public roles. After raising several children, she assumed responsibilities at the museum her mother had entrusted to her, while simultaneously taking continuing education classes and collaborating with Bob Friedman on her grandmother's 1978 biography. Her life and legacy, like that of her mother and grandmother, became inseparable from the Whitney. Despite its relative neglect of art and artists, an estimable history of the Whitney, with illuminating forays into the history of several prominent American families. Read full book review >