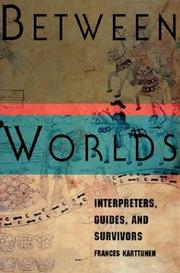 NON-FICTION
Released: March 15, 1994
BETWEEN WORLDS: INTERPRETERS, GUIDES, AND SURVIVORS
by Frances Karttunen
NON-FICTION
Released: March 15, 1994
BETWEEN WORLDS: INTERPRETERS, GUIDES, AND SURVIVORS
by Frances Karttunen
Karttunen (Anthropology/Linguistic Research Center, Univ. of Texas) has identified a fascinating topic in the lives and roles of interpreters, guides, and informants to missionaries, explorers, soldiers: world-bridging mediators, the ultimate aliens. Using the languages she knows and works that have survived, Karttunen presents not theory or symbols but life stories, nine in detail, seven more briefly. Dividing these into three major groups- -the guides, the civil servants, and the informants or wordsmiths- -she ranges from the earliest explorers to contemporary drug culture: the familiar Ishi, the last surviving Yahi Indian; Do§a Marina, interpreter for Cortes in his conquest of Mexico; Sacajawea, who guided Lewis and Clark over the Continental Divide; Sarah Winnemucca, who started as a US Army Scout in the 19th century and became a lobbyist for her Native American tribe; Gaspar Antonio Chi, a 16th-century Inca who recorded the destruction of his culture; and Charles Eastman, the Sioux physician at Wounded Knee whose legacy is in the ceremonies of the Boy Scouts and the Campfire Girls. The three major native informants are especially interesting, though hardly representative of their cultures: Larin Paraske, a pitiful 19th-century migrant Finnish poet; Do§a Luz Jimenez, model for Diego Rivera, who embodied the spirit of Mexico in his paintings and murals; and Maria Sabina, the Mazatec mushroom shaman exploited by the drug cults of the 60's. Though the book is never overtly moralistic, exploitation is its theme—the terrible price these unusual figures played for being the messengers, the spokespeople. As Karttunen skillfully represents them, their lives- -and the lives of their children—are all poignant, if not tragic. Even without a theory to explain them, these figures form a memorable group, the admonishing statues in abandoned temples. Would make a great PBS documentary. Read full book review >