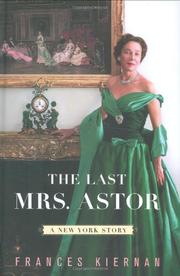 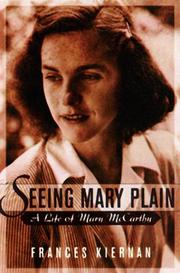 BIOGRAPHY & MEMOIR
Released: March 1, 2000
SEEING MARY PLAIN: A LIFE OF MARY MCCARTHY
by Frances Kiernan
BIOGRAPHY & MEMOIR
Released: March 1, 2000
SEEING MARY PLAIN: A LIFE OF MARY MCCARTHY
by Frances Kiernan
An extraordinary biography of the late essayist and novelist (1912—89) by a former fiction editor of The New Yorker. Kiernan begins in 1984 as McCarthy accepts a literary prize, then returns to 1910 and chronology. After her parents died in the 1918 flu epidemic, Mary went to live with relatives, attended Catholic schools (experiences she assessed in Memories of a Catholic Girlhood, 1957), attended Vassar (where she played the Virgin Mary in a pageant and later set her best-known novel, The Group, 1963), and then set out to conquer a literary world not friendly to women, especially those with her acerbic wit and disarming candor. As a drama critic, she savaged plays that have become masterpieces of the American stage, including A Streetcar Named Desire. She went on, however, to enjoy a distinguished, though controversial, literary career, which featured, near the end, a bitter libel suit by Lillian Hellman. Responding to an "irresistible impulse," she abruptly ended the first of her four marriages, then married critic Edmund Wilson (a "fat squinty-eyed cartoon character with a skull like a squashed melon," comments Kiernan). Her final marriage—to diplomat Jim West—lasted her remaining 29 years. Kiernan reveals startling details about McCarthy's sex life (She reprints Edmund Wilson's description of his techniques for bringing McCarthy to orgasm, and reveals that both Arthur Koestler and Paul Tillich made unsuccessful passes at her), and discloses how fame and modest fortune engendered McCarthy's surprising fondness for fashion. Kiernan is not always profound, and is sometimes downright banal in her observations——If you don't like the way things are going, you can stand and fight or you can pick up and leave"—and in her use of myriad offset quotations from McCarthy and her circle, which suggest a research paper by an undergraduate determined to use all her note cards. All in all, though, the definitive life of McCarthy, comprehensive in scope and scrupulously researched. (16 pages photos, not seen) Read full book review >