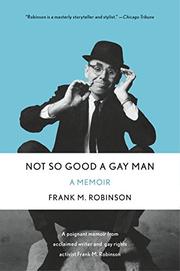 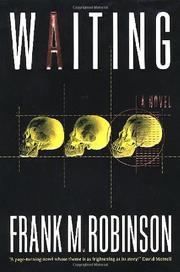 MYSTERY THRILLER
Released: April 1, 1999
WAITING
by Frank M. Robinson
MYSTERY THRILLER
Released: April 1, 1999
WAITING
by Frank M. Robinson
A thriller about the distant past and terrifying future, set in a vividly drawn San Francisco, from the author of The Dark Beyond the Stars (1991), etc. When a physician, Larry Shea, is killed by feral dogs, his friend Arthur Banks suspects foul play: Shea had been on route to give a speech to Banks's club, a group of intellectuals who have met periodically since the 1960s. While previously autopsying the victim of an automobile crash, Shea had discovered another, ancient species of humankind, a distant cousin of Homo sapiens that was slower to develop language skills but grew adept in telepathy and telekinesis. Shea left behind him a rough draft of an article on the "Old People," and soon those others in Banks's group who are acquainted with the article begin dying, all of them violently. Most are apparent suicides, and Banks, too, nearly kills himself after he's visited with an incredible feeling of sadness for all the loneliness in the world and for the inevitable doom of humanity. His son saves him—but then son and wife disappear. Grimly, Banks sets out to find the secret of the murders and why his family seems connected to them. At last the motivation of the Old People grows clear: not just to remain hidden, but to war against a Homo sapiens bent on destroying the earth. The Old People are about to inherit the earth, after all, for they have unleashed a doomsday virus—a particularly virulent form of TB to which they are immune and Homo sapiens is not. Preposterous, but riveting all the same. Robinson's gloomy prognosis for the destruction of every ecosystem sustaining Homo sapiens seems all too plausible. Read full book review > 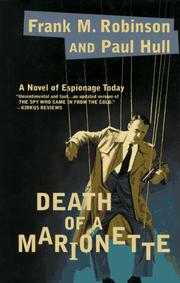 MYSTERY THRILLER
Released: Nov. 1, 1995
DEATH OF A MARIONETTE
by Frank M. Robinson, Paul Hull
MYSTERY THRILLER
Released: Nov. 1, 1995
DEATH OF A MARIONETTE
by Frank M. Robinson, Paul Hull
A moody and intricate postCold War thriller from Robinson (The Dark Beyond the Stars, 1991, etc.) and the pseudonymous Hull, this one centered on an aging spy who wrestles with years of guilt and self-doubt. Vietnam vet Neal Morley, now a US agent specializing in counterterrorism, travels to Brussels to interview an old puppet- maker with a big story to tellnamely, that he helped smuggle into the country seven people he now thinks are terrorists. Unfortunately, however, the old man is murdered before Morley can get all the details. Working then with the puppeteer's adopted daughter, Hannie de Vries, Morley tries to track down the terrorists, who, he figures, killed in order to cover their tracks. As it happens, Morley's taken this assignment for reasons of revenge: In the same city six months before, he exposed a major drug ring and was nearly killed himself; despite what his superiors insist, Morley's sure the ring wasn't completely dismantled and that his would-be assassin is still waiting. Physically weakened and emotionally scarred, Morley walks the cold and drab streets of Brussels, thinking back with profound regret over things he's seen and done through his lifeVietnam war atrocities, murders, people used and discarded, sometimes his own complicity. He's so unnerved and regretful that he wonders whether he's lost his edgea topic his fellow agents gleefully discuss in his presence. After the terrorists make several attempts on his life, Morley hooks up with a Russian agent, Vasiliev, who's also trailing them. When de Vries is kidnapped, Morley begins to piece together the links between the terrorists, the drug ring, his near-death six months ago, and a missing Russian scientist Vasiliev desperately needs to find. Throughout, Morley struggles to create some small justice in atonement for past sins. Unsentimental and taut. An updated version of The Spy Who Came in From the Cold, though not quite as dark. Read full book review > 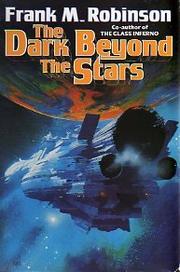 SCIENCE FICTION & FANTASY
Released: July 22, 1991
THE DARK BEYOND THE STARS
by Frank M. Robinson
SCIENCE FICTION & FANTASY
Released: July 22, 1991
THE DARK BEYOND THE STARS
by Frank M. Robinson
Robinson's latest (The Great Divide, 1982, etc.) is a work of wholehearted sf that, while never expanding on the traditional elements of the genre, does a commendable job of using its strengths in an engaging story laced with genuine scientific and philosophical speculations. After a near-fatal accident, young tech assistant Sparrow awakens aboard the aging starship Astron with severe amnesia. The Astron has been exploring the galaxy for 2000 years, searching without success for any signs of alien life. As Sparrow struggles to rediscover his identity and reestablish friendships among the crew, he learns that a mutiny is brewing—the captain determines to cross the empty Dark to continue the search on the other side, but many in the crew fear the ship will never survive the journey and want to turn back toward Earth. Courted by both sides, Sparrow quickly realizes that something hidden in his memory will prove the key in the conflict. Sparrow's vacillation between loyalty and mutiny leads to interesting discussions of the likelihood of alien life in the universe, and Robinson presents convincing arguments for and against the possibility. But the true strength of the novel lies in its focus on the human element. Amid all the trappings of large- scale sf, Sparrow's inner turmoil, along with the characters of the other crew members, is consistently presented with insight and compassion. Read full book review >