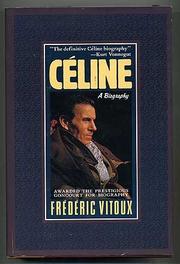 NONFICTION
Released: April 29, 1992
CELINE: A BIOGRAPHY
by Frédéric Vitoux
NONFICTION
Released: April 29, 1992
CELINE: A BIOGRAPHY
by Frédéric Vitoux
Sympathetic, perfectly tuned biography of France's most word- wild, controversial novelist ever, whose sins put Zola and Genet in the shade; by French CÇline-scholar Vitoux, and superbly translated by Browner. According to Vitoux, only three of CÇline's novels are now available in English: Journey to the End of the Night, Death on the Installment Plan, and Guignol's Band. CÇline (1894-1961) was a towering stylist who invented his own gutter argot. He wrote...fulminated!...blew his guts into your face!...with three little dots...smashing all grammar!...no subjects! stinking predicates!...a rich black delirium of Shakespearean belches!- -though in Journey, his first foulmouthed masterpiece, he'd not yet invented the three dots. Born to the petite bourgeoisie as Louis- Ferdinand Destouches, he suffered poor health most of his life, wrote scathingly of the stifling, gaslit Paris passageway in which he spent his youth, created a monster of his father (really a rather nice guy), was wounded in WW I, reeled from headaches and hallucinations and ever after complained of a train passing by in his left ear. CÇline, a doctor, traveled (or fled) greatly, always visiting health clinics wherever he went, especially in the US: A visit to the Ford auto plant in Dearborn produced a chapter of bilious satire in Journey. When that novel was published, Vitoux tells us, France swooned with joy and horror, and Death on the Installment Plan brought such geysers of outrage that CÇline became a paranoid victim of persecution mania and wrote two filthy anti- Semitic tracts, for which he was vilified for the rest of his life and which helped land him in prison for a year in postwar Denmark. He died having finished a horrific trilogy about WW II; its central novel, North, is now a classic. Vitoux makes few excuses for CÇline but does show that his anti-Semitism was both a mania and a literary artifice. Strong stuff. Read full book review >