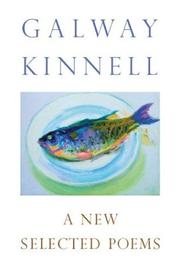 Released: April 24, 2000
A NEW SELECTED POEMS
by Galway Kinnell
Released: April 24, 2000
A NEW SELECTED POEMS
by Galway Kinnell
" A work that belongs in every library. "
A ``new selected'' from one of America's national treasures. Drawn from eight of Kinnell's ten individual volumes, this lovely distillation of work begins with five poems from What a Kingdom It Was (1960) and concludes with ten from Imperfect Thirst (1994). His previous Selected Poems (1982) won the Pulitzer Prize, and Kinnell has received both MacArthur and National Book Awards. In a prefatory note, Kinnell reminds us that he, like the painter Manet, is the sort of artist who is constantly ``touching things up.'' But while Manet had to be restrained from carrying his paints right into the local museum where his paintings were already up on the walls, Kinnell's curatoreditor granted him the liberty of revision. Readers fond of previous versions of poems may revisit them, of course, in the original books, but the small changes that Kinnell has made are unlikely to disturb even the most discriminating memory. It would be wrong to generalize about poetic output that spans more than three decades, but throughout Kinnell's work a recognizable voice and sure craft are evident. Like James Wright, Kinnell has a gift for observing the natural world: ``There is a fork in a branch / of an ancient, enormous maple, / one of a grove of such trees, / where I climb sometimes and sit and look out / over miles of valleys and low hills.'' The introspective sequence, ``When One Has Lived a Long Time Alone,'' explores physical and psychological aspects of solitude unflinchingly: ``When one . . . abandons hope / of the sweetness of friendship or love, / before long can barely grasp what they are, / and covets the stillness in organic matter, / in a selfdissolution one may not know how to halt.'' Read full book review >