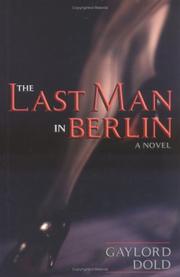 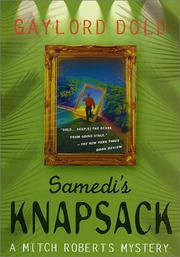 MYSTERY THRILLER
Released: May 1, 2001
SAMEDI’S KNAPSACK
by Gaylord Dold
MYSTERY THRILLER
Released: May 1, 2001
SAMEDI’S KNAPSACK
by Gaylord Dold
"Another competent hard-boiler from Dold (The Devil to Pay, 1999, etc.), though it does go a bit soft in the middle."
Needing some warmth after three years of dank, dreary London, Mitch Roberts—part-time p.i., part-time horse-trainer, full-time melancholic—tells his long-term love, Amanda, "I'll never forget you," and heads for Florida, where it's not just warm, it's hot enough to blister. Which is how things get for Mitch in a Miami minute. No sooner does he deplane but he's mugged, losing his driver's license, the $1,200 in his wallet, his lone credit card, and his precarious sense of well-being. But the temperature keeps rising. Bobby Hilliard, the "old friend" Mitch calls on in time of need, lives in a mansion and leads a life of well-heeled respectability, purporting to be a successful art dealer. He's ready to lend Mitch the $200 required to finance the rest of his journey to Mitch's native Colorado. All he asks is a small favor in return. And that's how Mitch finds himself in Haiti buying paintings, contending with the Ton Tons, those thuggish government cops, and a violent political situation while trying to stay alive long enough to find out just what sorts of activities sphinx-like Bobby had in mind when he told him, "I open myself to the world's possibilities." With the help of a loyal guide and his latest lovely, he finally manages to get clued in. Read full book review > 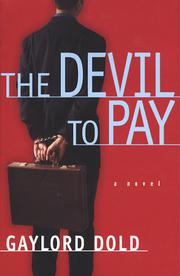 MYSTERY THRILLER
Released: Feb. 22, 1999
THE DEVIL TO PAY
by Gaylord Dold
MYSTERY THRILLER
Released: Feb. 22, 1999
THE DEVIL TO PAY
by Gaylord Dold
Don't care for lawyers? Then you'll love this tale of how a down-on-his-luck attorney's slide to destruction is greased by his own legal counsel. Despite a fat trust fund and a trophy wife, San Francisco lawyer Jack Darwin is in trouble. His marriage is on the skids, since shy, bookish Darwin shares only one interest with vivacious Karla, and they hardly ever indulge that one anymore. Karla's spending habits have made a big dent in Darwin's trust fund, whose principal won't get turned over to him for another ten years. And his first foray into criminal defense will come a cropper as soon as the judge hears Darwin's hopelessly amateurish motion to dismiss. But as Darwin is sitting over still another bourbon bemoaning his fate, a fairy godmother appears in the form of David Avila, a fellow attorney who helps the other lawyer redraft his motion, points him toward some lucrative criminal defense work, and takes him under his wing. Darwin doesn't know that his new friend, fresh from Karla's bed, has already been plotting ways to relieve him of wife, home, and trust fund. So even as Darwin thinks he's taking the first steps toward a new life with law- student Dolores Hernandez, he's in fact following the footprints his fairy godmother has laid out for him—prints that lead to a messy divorce amid allegations of assault, a hopelessly compromised reputation, and, inevitably, the hot seat in a murder trial, with Avila on hand to run Darwin's defense into the ground. Dold (Schedule Two, 1996, etc.) presents Darwin's bumpy descent with easy empathy for this flawed, gentle man, but also, regrettably, with a complete lack of surprise. It's fun for a while to watch diabolical Avila sink his client deeper and deeper into the muck, but even when the worm begins to turn, the revelations that will save Jack are as predictable as the villainy. Still, this is a sturdy nightmare for readers who love lawyers, and a satisfying revenge fantasy for readers who don't. Read full book review >

Released: Sept. 12, 1996
SCHEDULE TWO
by Gaylord Dold
Released: Sept. 12, 1996
SCHEDULE TWO
by Gaylord Dold
Grace Wu's been undercover for two years, gradually moving up in the ranks of San Francisco's narcotics trade. Her sale of a pound of coke to Clemente Moreno went off without a hitch, and the low-level Moreno seems to trust her. But now it's time for the big score—a deal with Kyungmoon Nho, a ruthless kidnapper and a man who doesn't mind killing his competition. Backed up by Elgin Lightfoot (DEA) and Lt. John Zito (SFPD), Grace is all set for a $100,000 buy from Nho. She doesn't know that Zito, a classic abuser strung out on coke and vodka, is ready to sell her out for a slice of Moreno's small-beer action. Dold (Bay of Sorrows, 1995, etc.), who presents the first half of this postcard from the pit with grim authority, ratchets up the tension by his telling close-ups of the seemingly endless moments just before things begin to go lethally wrong. It's only after the worst happens to Grace that the menace turns routine. Read full book review > 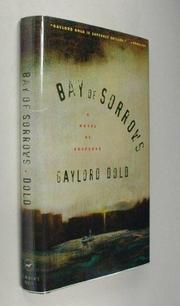 Released: Feb. 9, 1995
BAY OF SORROWS
by Gaylord Dold
Released: Feb. 9, 1995
BAY OF SORROWS
by Gaylord Dold
The Vietnamese shrimper found dead in his shack seems far too inoffensive to have been a murder victim. But Nguyen Bao Do's daughter Tran can't believe her father, a war-hardened survivor, would have shot himself, so Jefferson County, Tex., deputy Tom Poole rouses himself from his divorce-addled funk and investigates. And finds two surprises: Tran's sympathetic neighbor Adrienne Deveraux, with whom he slips into an affair; and 200 pounds of Jamaican gold, which he stumbles over in an unofficial search of Tran's boat for Bao Do's missing Colt .22. Poole's dilemma—all that reefer, and not a search warrant in sight—drives him away from his leering sheriff, Daddy John Lister, and Daddy John's bubba son Darnell, and into the arms of DEA agent D.J. Donald, in the hope of nailing Everett Teagarden, a rival shrimper (and drug mule?) who'd already made waves by vandalizing Vietnamese boats. But Teagarden responds to surveillance by getting killed, and when Jerry Donovan, Bao Do's son-in-law, moves up from petty larceny to homicide victim himself, it looks like Bao Do's going to get lost in the DEA shuffle. Why would anybody moving drugs along the Gulf coast have stopped to snuff out the old man? A break from Dold's Mitch Roberts series (The World Beat, 1993, etc.) that's equally moody and atmospheric, equally depressive, and equally unlikely to win the author any invitations from the Port Arthur Chamber of Commerce. Read full book review > 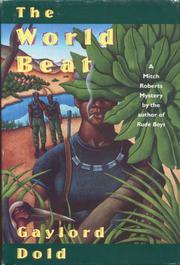 Released: Dec. 7, 1993
THE WORLD BEAT
by Gaylord Dold
Released: Dec. 7, 1993
THE WORLD BEAT
by Gaylord Dold
Since the kidnapping insurance that Lloyd's of London has supplied to EuroCopper, the mining combine, won't cover the ransom Dr. Elyse Revelle's tribal captors demanded when they snatched her from her clinic in Zaire, Lloyd's needs somebody to head into the heart of darkness and negotiate the amount—somebody who doesn't have any inconvenient friends or relatives who might make a fuss if he disappears. Enter expatriate American Mitch Roberts (Rude Boys, 1992, etc.), whose cute scheme, hatched together with his native contact Adam Mbenga, to swap the ú75,000 ransom for an equivalent sum in uncut diamonds seems to put him at risk from every thug in central Africa. Sedate and dankly atmospheric, even before Roberts comes down with cholera. Be warned, though: despite its greater length and self- seriousness, the plot is no more than an overdrawn anecdote. Read full book review >

Released: Nov. 20, 1992
RUDE BOYS
by Gaylord Dold
Released: Nov. 20, 1992
RUDE BOYS
by Gaylord Dold
Mitch Roberts (A Penny for the Old Guy, etc.), now stranded in London while he beds down in Amanda's basement and tries to decide whether he loves her or not, is working off the books, so to speak, for Jamaican-born attorney Hillary Root, on the verge of trying her first case, when her Rastafarian half-brother is poisoned, then has his throat slit. When Hillary's father is also mutilated, as well as her cat, Mitch begins to seriously investigate—in a search that will send him from London's docks and Rasta bars and dope-dealers to Jamaica's Blue Mountains and Rude Boys (malicious gangsters) before he realizes that all the leads tie in with Hillary's client, a man accused of a bar murder, who is now loudly denouncing Hillary as incompetent to defend him. Regardless, she gets him off, and, too late, Mitch has proof of his involvement with her family murders. Can justice be served? Not in the courts, perhaps, but possibly with a telex Mitch sends to a vengeful Jamaican.... Depicts a side of Jamaica the tourist board never mentions— in a nicely done, medium-boiled poke-in-the-heart at Empire race relations. Read full book review > 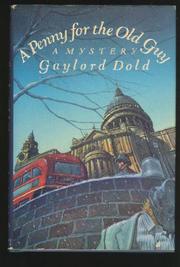 Released: Nov. 22, 1991
A PENNY FOR THE OLD GUY
by Gaylord Dold
Released: Nov. 22, 1991
A PENNY FOR THE OLD GUY
by Gaylord Dold
The seventh adventure (first hardcover) for American detective Mitch Roberts, who accepts the unhappy task of discovering how young Jonathan, the son of an old love from his war days, happened to drown ``accidentally'' in the Cam. When Jonathan's roommate, young Dutchman Wim van Euwe, takes a header out a Harlow School window, Mitch flies to Amsterdam to interview his family and discovers a complicated scheme to drive a rift between a Dutch oil company and its host country, Indonesia—a scheme that would benefit the English. Back in England again, Mitch learns both boys were probably sedated with a paralytic toxin; that Jonathan's death was undoubtedly a case of mistaken identity; and that the Home Office seems to be involved in a coverup—and behind an order to deport Mitch. Carefully evading his deporters, Mitch confronts the political intriguer, though he cannot prevent a major embarrassment to the Home Office. Low-key, and a nice example of the small, bittersweet mystery- -with appealing glimpses of a younger, more innocent Roberts. Read full book review >