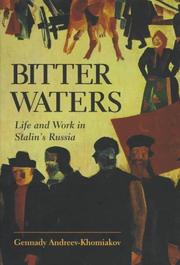 BIOGRAPHY & MEMOIR
Released: Sept. 1, 1997
BITTER WATERS: LIFE AND WORK IN STALIN'S RUSSIA
by Gennady Andreev-Khomiakov
BIOGRAPHY & MEMOIR
Released: Sept. 1, 1997
BITTER WATERS: LIFE AND WORK IN STALIN'S RUSSIA
by Gennady Andreev-Khomiakov
A memoir of life in Stalin's Soviet Union in the 1930s that tells us more of how the system worked—and how shrewd workers outwitted it—than a dozen monographs. Sentenced in 1927 to ten years in the Gulag for ``counter-revolutionary activities,'' Andreev-Khomiakov, a staffer at a provincial newspaper and a writer of short stories, was released two years early, in 1935, but forbidden to stay in 41 cities or within 200 kilometers of the Soviet border. He was fortunate enough to land in the forest industry, in charge of planning for one Neposedov, a man of splendid enthusiasms and a manipulative cunning that enabled him to sidestep much of the prescribed constipation of the Soviet system. It was impossible to attain the goals demanded of the system honestly, and Andreev captures the shifts and evasions, the bribery and falsification required actually to do the job, otherwise described by the authorities as ``manifesting a healthy initiative.'' And he describes, too, the delight of the workers when, Neposedov having obtained appropriate machinery by arcane strategems, they actually could do their work and be paid a fair wage for it. Soon the factory is exceeding its production targets by 30 percent and more. It can't last, of course, and in 1938 they are notified by the Peoples' Commissariat of Forestry that it will cease delivering timber. Neposedov tries everything, but it is the end. The whole process has ruined the forests and the lives of those working in the industry, despite, Andreev remarks, `` `all-hands efforts,' `all-out offensives,' `mobilizations,' `mechanization,' and of course . . . sacrificing millions of people.'' The final irony comes with the outbreak of WW II, when Andreev joins with his coworkers at the head office in Moscow in throwing out into the courtyard the thousands of files carefully itemizing every detail of the grand design. Andreev's humor, vitality, and mordant observations illuminate what might, in lesser hands, be a depressing chronicle. Read full book review >