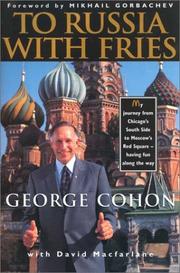 BIOGRAPHY & MEMOIR
Released: May 10, 1999
TO RUSSIA WITH FRIES
by George Cohon, David Macfarlane
BIOGRAPHY & MEMOIR
Released: May 10, 1999
TO RUSSIA WITH FRIES
by George Cohon, David Macfarlane
The golden arches of McDonald's, resplendent in the dour precincts of Pushkin Square, are symbols of the triumph of capitalism. That Ronald McDonald cavorts in Nizhni Novgorod and St. Petersburg may seem inevitable now, but time was when it was inconceivable. It took the chief cook and battle fighter of the Canadian arm of the burger empire to make such marketing history. In this far from bashful business autobiography, Cohon tells how he worked from perestroika through glasnost, from Brezhnev to Yeltsin, to bring "Beeg Meks" and fries to hungry Russians. During the 14 years of negotiation, Cohon had to explain the concept of hamburgers to myriad apparatchiks. He developed warm relationships with several bigwigs, including his pal Mikhail Gorbachev, who provided the foreword for this text. The essential democracy of fast food complemented the post-Soviet social upheavals, as did the "rubles only" policy, contrasted with the "hard currency only" rules of more upscale eateries. The natives loved the open door and the friendly crew as well as the food that burger diplomat Cohon insists is healthy. After all, he had to grow the potatoes and cook the ketchup to meet company standards. Indeed, the network of suppliers proved the greatest challenge. The account seems as devoid of guile as an Egg McMuffin. Throughout, Cohon refers to the inspiring sayings of Chairman Ray Kroc, who gave him the Canadian franchise in the first place. The author, born in Chicago, is now a citizen of Canada, where the book first appeared. He speaks of "pop" (for "soda"), writes "cheques," and mentions celebrities who—with the possible exception of Pierre Trudeau—are, regretfully, unnoticed below the border. An animated story extolling the author's family, friends, faith, and business adventures, told in straightforward fashion. Like the billionth Big Mac, it's not haute cuisine but is satisfactory on its own level. (32 pages b&w photos) Read full book review >