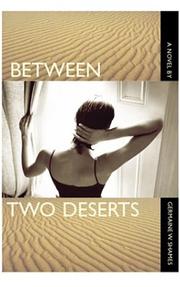 FICTION & LITERATURE
Released: Aug. 9, 2002
BETWEEN TWO DESERTS
by Germaine W. Shames
FICTION & LITERATURE
Released: Aug. 9, 2002
BETWEEN TWO DESERTS
by Germaine W. Shames
"Richly textured, but the link between Eve's 24-7 sex appeal and the larger message of peaceful coexistence is tenuous, making her more cipher than symbol."
This evocative plea for the power of love in the heart of Middle East turmoil, the story of a young American woman of singular charm, shifts uneasily between tragedy and fantasy. As the Intifada rages, Eve Cavell enters Jerusalem, City of Light and Stone, accompanied by the ghost of her grandfather, who died starting the trip she has finished, and moves into the Muslim Quarter. Her raven hair and sensuous form are a siren call to men young and old, Palestinian and Israeli. While dashing Salim, apolitical scion of an old and once-proud Jerusalem family, shares her bed, watching them through the curtains from the street below is Mozes, ex-Hungarian partisan whose one novel, A Time For War, has been a bestseller in Israel for 40 years. Old and alone, he sees in Eve his Muse, who will help him to repudiate his former clamor for war and introduce a new message of love and understanding. Salim has to flee Jerusalem ahead of the jihad's disapproval of his form of collaboration, but Eve works her brand of magic on a street preacher, a father and son—the former temporarily leaving his wife for her, the latter trying to save her from Israeli intelligence—and ultimately on Mozes's son, who comes from Hungary to bury his father, killed at a bus stop by a knife-wielding fanatic. Read full book review >