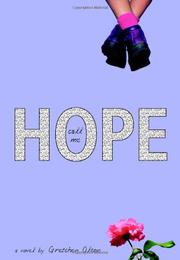 CHILDREN'S
Released: April 1, 2007
CALL ME HOPE
by Gretchen Olson
CHILDREN'S
Released: April 1, 2007
CALL ME HOPE
by Gretchen Olson
Hope's mother verbally abuses her, calling her hopeless, an accident, stupid, the reason her father left, as well as innumerable profanities. When she's brought into the principal's office for calling another student a "dumb shit," her mother arrives, speaking demeaning profanities about Hope to the principal. So the reader gets the picture right away. Because her sixth-grade class is studying the Holocaust, she begins reading Anne Frank, and watches the film Life is Beautiful. Hope begins to develops coping methods, as did Anne in her attic and Guido in the internment camps. All the while, readers see her as a good girl, smart and hardworking, while her mother continues to denigrate and dismiss her. Fortunately, she has support from other adults and an older brother who knows her grief. The abuse remains erratic—like living with a rattlesnake—and finally, Hope's mother refuses to give her permission to attend the most important event of the year, the Outdoor School. Her brother contacts educators and friends, who intervene and convince her mother to change her mind. When Hope comes home, her mother has begun counseling and is beginning to change. Written for the purpose of helping other abused children, this has a hopeful, though rather facile ending; sadly, such is not the case for every abused child. (Fiction. 10-14)Read full book review > 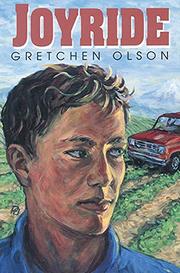 CHILDREN'S
Released: Feb. 1, 1998
JOYRIDE
by Gretchen Olson
CHILDREN'S
Released: Feb. 1, 1998
JOYRIDE
by Gretchen Olson
An affluent Oregon teenager undergoes some value adjustment when he's forced to help a grower with the strawberry harvest in this earnest and engaging debut. After ramming his Bronco into a water pump on a nighttime jaunt across a bean field, Jeff faces a month's labor to work off the debt. It comes at the worst possible time, as far as he's concerned, for he's angling for a sports scholarship for college and there is a major tennis tournament coming up. Initially uncomfortable with the crew of migrant workers, not to mention the farmer's hostile daughter, Alexa, Jeff fits in quickly; he discovers that he cares more and more about both the crop and the people, and is predictably surprised to learn that one of the rewards of hard physical labor is a new edge on the tennis court. With engrossing authority, Olson describes the trials and satisfactions of running a farm, the process of harvesting, and though she sidesteps many of the controversial aspects of using migrant labor, every comment about ``beaners'' or ``wetbacks'' draws an instant and crushing rejoinder from one character or another. A likable cast and several small plot twists buoy up the agenda, and at peak moments the author's competent prose shows glimmers of something finer. Some will want to balance this employer's-eye view of migrant labor with books such as S. Beth Atkin's Voices from the Fields (1993, not reviewed), but Olson knows how to keep readers turning the pages. (Fiction. 10-13) Read full book review >