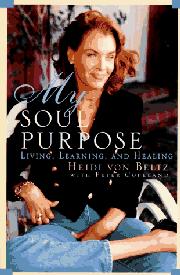 NON-FICTION
Released: March 1, 1996
MY SOUL PURPOSE: LIVING, LEARNING, AND HEALING
by Heidi von Beltz, Peter Copeland
NON-FICTION
Released: March 1, 1996
MY SOUL PURPOSE: LIVING, LEARNING, AND HEALING
by Heidi von Beltz, Peter Copeland
A name-dropping, often funny account by one of California's golden girls who, paralyzed from the neck down after a car crash, prevailed over predictions that she faced life as nothing more than a ``talking head'' and death within five years. Von Beltz fooled them, of course. Fifteen years later, she is able to sit and stand, has control over bodily functions, and can party with the best of them. She has even had a passionate affair with actor Ray Liotta. At 25, von Beltz, daughter of a Hollywood film family, was on her way to success as an actress and producer/director. Athletic and willing to take risks, she also took jobs as a stuntwoman. The accident that immobilized her took place in 1980 during a stunt scene for Cannonball Run; she woke up in a hospital with her head and body immobilized on a board suspended above the bed. She and her family simply refused to accept the medical prognosis. With help from a Christian Science advisor, a talented chiropractor, a retired neurosurgeon, and many others along the way, they set out to restore Heidi's body—a long, frustrating process. Von Beltz put almost as much work into keeping her social life going, starting with champagne parties in her hospital room and, later, weekend bashes at her Malibu house. Best friend Melanie Griffith was loyal throughout and even learned to catheterize her buddy, as recounted in a scene outrageous enough for a Griffith movie. Reading omnivorously about both science and spiritual journeys, von Beltz sought to strengthen the connection between the two. With the help of journalist Copeland, she passes her findings and convictions along. Inspirational, yes, but also remarkably lighthearted and gossipy (Harrison Ford is an early player). A reader would want to be on the guest list at one of von Beltz's parties. (16 pages b&w photos, not seen) Read full book review >