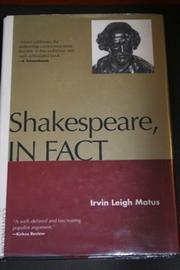 BIOGRAPHY & MEMOIR
Released: Jan. 10, 1994
SHAKESPEARE, IN FACT
by Irvin Leigh Matus
BIOGRAPHY & MEMOIR
Released: Jan. 10, 1994
SHAKESPEARE, IN FACT
by Irvin Leigh Matus
Although more than 300 books have disputed the authorship of poems and plays most often attributed to Shakespeare, Matus (the scholarly Shakespeare, 1991—not reviewed) now offers what he believes should be the final one, presenting an irrefutable Shakespeare who was himself and not the 56 others—scholars, royals, obscure geniuses—put forth in his stead. Matus's primary challenge here is to the 17th Earl of Oxford- -and to the camp of scholars, the ``Oxfordians,'' who support him. Matus's mastery of the Elizabethan Age, and especially of its publishing and theater history, gives him an edge. He establishes the ``paper trail'' left by Shakespeare as both actor and playwright; left by the stationers (printers) involved in publishing the plays; by the scripts and their relationship to performances; and by the reluctance of actors and their companies to publish plays that would break their monopoly on production. The value of Matus's argument lies in these fine observations and in the mass of evidence he accumulates about other playwrights, their sources in antiquity and contemporary Europe, and their performance history and practice—all the while challenging the Oxfordians. In this context, Matus reconstructs Shakespeare's reputation, theater, profession, editions, and performances, and he explores the distinctions between scholarship and performance, as well as between theater and drama. Scholars, he concludes, created ``bardolatry,'' inflating Shakespeare's talent and achievement, and then proposed other authors to account for this image of a genius. When viewing Shakespeare as playwright in his own time, it's possible, Matus says, to appreciate the historical man as the industrious author of his works. Finally, Matus criticizes his own art—the art of scholarship—and advocates knowing Shakespeare primarily through performance. A well-defined and fascinating populist argument that makes Shakespeare accessible as a hard-working and clever man of the theater. (Seventy-five illustrations) Read full book review >