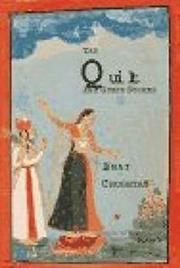 FICTION & LITERATURE
Released: Sept. 12, 1994
THE QUILT: AND OTHER STORIES
by Ismat Chughtai
FICTION & LITERATURE
Released: Sept. 12, 1994
THE QUILT: AND OTHER STORIES
by Ismat Chughtai
Writing in Urdu, Chughtai (19151991) paved the way for modern Indian and Pakistani women writers to harshly probe their social milieu's double standards for men and women, rich and poor. Each of these 15 stories concerns marriage in one way or another, and most begin or end with a wedding. But don't expect happy romances; these are arranged, often brutal unions. The woman in ``The Quilt'' is so lonely in her husband's house that she takes a female servant as her lover; the beautiful young bride in ``The Veil,'' forbidden by Hindu tradition to remove her own veil, is thus forced to disobey her husband. While wedding guests heap praise on each bride's beauty, it is assumed that pregnancy will soon make them fat and ungainly. In ``The Eternal Vine,'' intense suspicion is aroused when the wife keeps her looks and indeed even looks younger as her husband ages. Even in this rigid society, a few young women manage to elope, usually with men of a different religion. Indeed, Chughtai's stories offer insightful glances into the conflicts faced when Muslims, Hindus, and Christians live side by side. As the book progresses, its focus shifts from the upper echelons to the servant class. Here, wives cannot be sent off; there's no money to pay for another bride, and it ``doesn't make a wit of difference, whether or not a servant maid enters wedlock.'' A maze of first, second, and third marriages—with unions between cousins, aunts, and uncles permitted—confuses reader and narrator alike: ``By some odd coincidence I was my mother's distant cousin as well, and by that token my father was also my brother-in-law,'' the youthful narrator of ``Aunt Bichu'' explains, pesenting one of the book's simpler equations. While the basic plots of these stories are engrossing, the characters aren't sufficiently individualized, possibly due to imperfections in the translation. Read full book review >