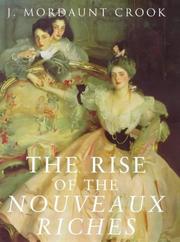 HISTORY
Released: Dec. 1, 1999
THE RISE OF THE NOUVEAUX RICHES: STYLE AND STATUS IN VICTORIAN AND EDWARDIAN ARCHITECTURE
by J. Mordaunt Crook
HISTORY
Released: Dec. 1, 1999
THE RISE OF THE NOUVEAUX RICHES: STYLE AND STATUS IN VICTORIAN AND EDWARDIAN ARCHITECTURE
by J. Mordaunt Crook
Mordaunt Crook, historian of British building (U. of London), takes a sociological approach to the houses of rich Victorians and Edwardians who rose to the beau monde without the decided advantages of ancient family lineage (see Trollope, Disraeli, or Ruskin). Wealth earned after the Industrial Revolution made the arriviste a gentleman, the parvenu gentry. (The subject calls for much French.) Forget primogeniture or entailment as keys to status. These newly minted grandees simply built or refurbished country seats, town houses, and shooting boxes on a monumental scale. Columned and crenelated, gaudy Palladian or French style, the huge buildings were massively ugly, and universally scorned by the Establishment. In his catalogue of these heaps, Mordaunt Crook adopts the same attitude, sniffing discreetly at their proprietors as well. Name after name, each linked with house and source of money, passes before the bemused reader. The parade includes millionaire brewers, financiers, and railroaders, as well as the malted milk magnate, the funerary crepe king, the sewing thread tycoon, the guano czar, and the inventor of the sugar cube. As they were at the time, affluent Jews are especially noted, from Barney Barnato to the Sassoons and their ilk. Nor does the roll call neglect the Crawshays of Cyfartha, Sir Algernon Borthwick, or "Walsingham—the man who shot 1,070 grouse in a single day at Blubberhouse Moor in 1888,——together with the rest of Debrett's, and their clubs, yachts, sporting rituals, and profitable marriages. It would all be very Merchant-Ivory or, more likely, very Gilbert and Sullivan if (despite rare shafts like "Louis Chintz decor" or —blue in tooth and claw") it weren't so soporific, especially for Americans who might not be so willing to tut-tut over the excesses of new money. How many, after all, would mind having Bill Gates' new digs? Sporadically ironic, generally tedious embroidery makes a dull job of a potentially lively subject. (134 b&w photos). Read full book review >