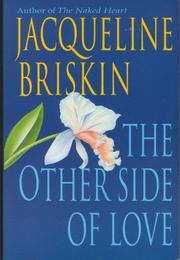 Released: May 10, 1991
THE OTHER SIDE OF LOVE
by Jacqueline Briskin
Released: May 10, 1991
THE OTHER SIDE OF LOVE
by Jacqueline Briskin
Briskin's heroines, tremulously soldiering on in, for instance, Dreams are not Enough (1986) or The Naked Heart (1989), are mega-beautiful, good and true. In fact, the code name of the brave little spy in this tenth romantic outing—which is set in Nazi Germany and involves a tri-national batch of cousins—is ``True Blue.'' Seventeen-year-old Kathe Kingsmith wins a medal for Germany at the 1936 Olympics in Berlin (Hitler thanks her ``on behalf of the entire volk''). Meanwhile, Kathe's American cousin Wyatt performs for the US in basketball, and Kathe and half-brother Siegfried also have English cousins—pretty, flirty Araminta and Aubrey. There's a special spark between Kathe and Wyatt that blazes when Wyatt tells her that he's not truly related to her: Wyatt's deceased father, he has learned, was Jewish—an eye-opener for Wyatt, now propelled to a new hatred of the Nazis. As the war begins, Kathe is, on her own, helping Hitler's victims, but then Churchill (who's read cousin Aubrey's first novel) enlists him and Kathe, in Germany, to work for British Intelligence. A good move, it turns out—Kathe'll tap orders for a Russian invasion and rocket-bombing of Britain. In the meantime: Kathe, pregnant by Wyatt, gives birth to Erich; rapist Nazi Otto thinks the boy is his; and there's a passel of family deaths, a cousinly marriage, all kinds of suffering and a search for Erich before Wyatt is shocked out of his unjust hatred of Kathe (misunderstanding and war have separated them)—''the other side of love.'' Not as much glamour-glaze as in previous novels—and no really stylish villains—but, still, Briskin's following is assured. (Literary Guild Dual Selection for July) Read full book review >

THE NAKED HEART
by
Another tale of trembling traumas and quivering innards, by the wildly successful Briskin—who here flutters her chiffon prose to reveal two miserably mismatched couples. The settings range from occupied France during WW II through L.A. and Manhattan (and a burb) to Paris in 1964. Ann Blakely, sole offspring of a brace of American dodos—who don't wedge themselves out of Paris before the Nazis come—and beautiful, sardonic Gilberte de Permont, daughter of the kind and high-minded Baron de P., are best of friends in Paris. Then the Nazis arrive. Ann, thanks to Gilberte's second cousin—the aristocratic American Quent—is whisked out in the nick, leaving her parents, who won't budge. But Gilberte is left to watch her parents die by torture and to become a victim herself. She bitterly survives, becomes the mistress of a "good" German general who admired her father, and bears a child, Michel. But she has taken a vow to destroy the one who had betrayed her parents as Resistance fighters. Meanwhile, Ann and Quent have vowed eternal love, but Gilberte quashes that, and Ann marries weak Larry, adopts Michel, and takes him, for his safety, to the US. Soon Gilberte will also move to the US, become head of a haute couture house, marry reluctant Quent. And she's still in pursuit of revenge. Who's her target? Best friend Ann! Gilberte turns dragon lady, and there'll be a death, mad meetings, and general misery before she's detoxified. All the pop tremors are here—classy clothes and digs, bel canto sex, fearless metaphorical flights ("A juggernaut of fear was flattening Gilberte's conscience"), and even a tiny flurry of French words. The Naked Heart will pump up sales-and readership. Read full book review >