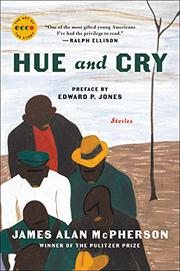 HUE AND CRY
by James Alan McPherson
"Half a century ago, Ralph Ellison was excited by the prodigious talent on display in this collection, and it can still galvanize contemporary readers."
Short stories reach across decades of racial upheaval and social transformation to reaffirm what remains human and vulnerable in all of us. Read full book review > 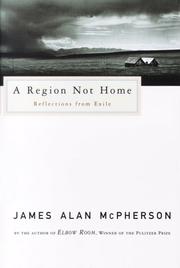 ESSAYS & ANTHOLOGIES
Released: Feb. 24, 2000
A REGION NOT HOME: REFLECTIONS FROM EXILE
by James Alan McPherson
ESSAYS & ANTHOLOGIES
Released: Feb. 24, 2000
A REGION NOT HOME: REFLECTIONS FROM EXILE
by James Alan McPherson
From Pulitzer Prize—winning essayist and novelist McPherson (Crabcakes, 1998, etc.), fresh perspectives on such topics as the role of athletes, father-daughter relationships, and the writer Ralph Ellison. As he seamlessly mixes classical tags, literary analysis, and down-home stories about his family in these essays, some of which first appeared in The Atlantic and Esquire, McPherson is also writing about his life as a writer, a father, and an African-American. He explains his decision to move to Iowa City, where he now lives and teaches, by noting its distance from the racist South of his childhood and the Charlottesville setting of his bitter divorce, a place that still retains "a sense of obligation to something . . . not . . . required by the rule of law.— In —Disneyland,— the most personal essay, he explains why he and his young daughter paid so many visits to the Magic Kingdom. He hoped that in a place where "the established order of dependability soars up into fields of magic," she would learn about those unexpected, magical interventions that transform the darkest moments in life. In other notable essays, he describes Ellison's love for American democracy, a love he compares to Virgil's piety; he contrasts the athletes in his small black college, race-bound Spartan hedgehogs knowing only one way to fight, with his own ambition to be an Athenian fox working against "the fate of a fixed purpose"; and he notes the growing clash between different ethical systems as immigrants and natives become neighbors. Only in —Junior and John Doe— does he falter because the arguments he marshals to support the proposition that blacks should reclaim the uniqueness they have lost in recent years are needlessly convoluted—a reminder how easy it is to take his polished prose for granted. A rich feast for the hungry mind. Read full book review > 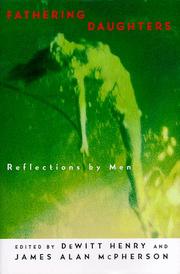 NON-FICTION
Released: June 21, 1998
FATHERING DAUGHTERS: REFLECTIONS BY MEN
edited by DeWitt Henry, James Alan McPherson
NON-FICTION
Released: June 21, 1998
FATHERING DAUGHTERS: REFLECTIONS BY MEN
edited by DeWitt Henry, James Alan McPherson
These essays by writers including Rick Bass, Alan Cheuse, Nicholas Delbanco, Mark Pendergrast, and editors McPherson (Crabcakes, 1998, etc.) and Henry (founding editor of Ploughshares magazine), among others, strike deep into the heart of issues spanning both nurture and gender relations, and represent some of the best recent writing about manhood. Looking beyond a politicized definition of the father-daughter relationship, the editors have sought for this collection essays that express what they call "the perplexities of parenting daughters during these decades of questioning, polarization, and social change." The results are grouped by life-stage ("Arrivals," "Early Childhood," "Girlhood and Adolescence," etc.). In the opening essay, about the birth of his daughter, Lily, Phillip Lopate struts his stuff, skillfully combining humor and seriousness to arrive at a persuasive rejection of solipsism. Fictionists Adam Schwartz and Samuel Shem are both fathers of adopted Chinese orphans. Says Shem in describing his young daughter's searching intensity, "Living with Katie is like living with a twenty-four-hour-a-day Zen master." Gerald Early, himself an African-American, recalls teaching his teenage daughter to drive and her search for a race-free identity. DeWitt Henry worries about his teenage daughter's late-night partying, and Gary Soto writes about living with depression as a father. All of these perspectives reveal hard-won insights about parenting girls and young women from a man's perspective. As might be expected of any thematic collection, some of the essays here are stronger than others. But the best are truly memorable, as with McPherson's "Disneyland," in which separation and race figure prominently, and which incorporates a haunting jazz-like refrain; and photographer William Peterson's "Border," about a last trip to Mexico with a daughter dying of leukemia ("there are some things you cannot accept"). Fine personal writings, to be published for Father's Day, that deserve a wide audience. Read full book review > 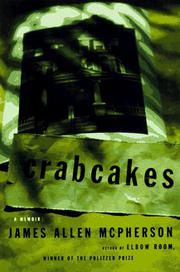 NONFICTION
Released: Jan. 7, 1998
CRABCAKES
by James Alan McPherson
NONFICTION
Released: Jan. 7, 1998
CRABCAKES
by James Alan McPherson
McPherson, author of the Pulitzer Prizewinning short-story collection Elbow Room (1977), writes here with an astonishing range of language and emotion. Having previously addressed the black experience in America on many levels, he now tells a profoundly personal tale of displacement and discovery that is poetic and universal. The life described in this volume comes into focus in a moment of retrospection, in a bitter season of doubt. ``Life itself'' had become his enemy, he writes: ``I sought to control its every effort at intrusion into my personal space''—space that was almost entirely confined to his bed, ``in which I perfected my escape from life into an art.'' Remembering the seasons of pain and repair in a lifetime of missed opportunities, he returns repeatedly in this account to Channie Washington, his longtime tenant, a nurturing, self-reliant, and deeply religious woman who represented sanctuary—``the place where you pause to get your bearings for the road.'' For McPherson, the present beckons to memory slowly, seductively, revelation then coming into Proustian clarity with a crabcake or the sensual gait of a brown-eyed woman descending a stair. The fish market of a Baltimore neighborhood where he first savored crabcakes, the fields of Iowa, where he now teaches, and the streets of Japanese cities, where he sojourned awhile, all gather into a personal monologue that invites us to understand the crossroads he has reached. Ultimately, McPherson finds renewal in simple sentiments. Late in a long conversation-letter to a Japanese friend that runs through the second part of the book, he reminds us that ``if nothing in the future of the present seems permanent . . . one can always focus on . . . the future enjoyment of a Maryland crabcake. Such exercises of the imagination keep hope alive.'' Although its ever-shifting form is sometimes unsettling, this is a thoughtful and life-affirming memoir, unforgettable for its humanity, its gentle pace. McPherson has traveled the world and never lost sight of the inspirational lure of one's origins. Read full book review >