Born in Texas in 1939, James Crumley spent his youth in the southern part of that state. He served as enlisted man for 3 years in the US Army. His first novel, 'One to Count the Cadence' (published in 1969) is a forceful rendition of the war in Vietnam 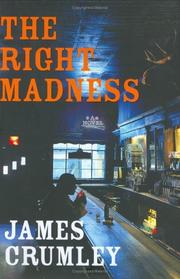 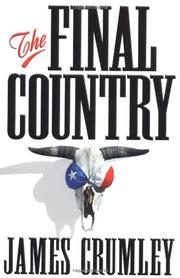 MYSTERY THRILLER
Released: Oct. 23, 2001
THE FINAL COUNTRY
by James Crumley
MYSTERY THRILLER
Released: Oct. 23, 2001
THE FINAL COUNTRY
by James Crumley
"'Evil just exists,' pontificates Milo, in the act of slowly, savagely torturing someone to death. 'I could only hope it wouldn't infect me.' Forget it, Milo. Your only hope is if they call off Judgment Day."
As bored and melancholic as the next Crumley hero (Bordersnakes, 1996, etc.), that restless, rootless, five-times-married, good-with-fists/bad-with-relationships, aging enfant terrible Milos Milodragovitch ventures into a Texas saloon in the wake of a resentful ex-con. For reasons insufficiently clear, Walker, the ex-con, is bent on mayhem, and in record time beats up a patron and blows away the saloonkeeper, thus—also for reasons insufficiently clear—raising himself in Milo's estimation as he watches Walker's rapid departure. Wishing to take up the matter of first-degree murder with him, the cops pursue, requesting cooperation from Milo, who withholds it. More: Milo decides there's a mystery here that deserves all his best efforts to penetrate. As a result of these fateful decisions, he loses his ladylove, finds another, gets on the wrong side of the powerful Lomax family, punches out a seemingly endless variety of targets—big guys, little guys, old guys, a fat lady, a one-armed man etc.—while abusing substances at a pace that leaves Sam Spade, Philip Marlowe, and Travis McGee in the dust. When the smoke finally clears and the dead bodies are shunted out of the way, Milo appears satisfied that his mystery has been well and truly penetrated—this, too, for reasons insufficiently clear. Read full book review >

MYSTERY THRILLER
Released: Nov. 15, 1996
BORDERSNAKES
by James Crumley
MYSTERY THRILLER
Released: Nov. 15, 1996
BORDERSNAKES
by James Crumley
Last heard from by way of The Mexican Tree Duck (1993), soulful and self-destructive p.i. C.W. Sughrue is here joined by his less poetical but even harder-living elder colleague Milo Milodragovich in a road odyssey that takes out colorful criminals north and south of the Rio Grande. The story involves Sughrue's extended revenge for his own near-murder, a quest that twists around and reinforces Milo's extended revenge against the lawyer who heisted his long-delayed inheritance. But these two booze-and- drug-maddened machismists shift motives with every hostile and come-hither look, and a reader's grasp of their convoluted tale is tested by repeated set-pieces of unleashed lust and sadism. Wonderful characters abound: ex-army good ol' boys, drug lords, movie directors, ranging in their behavior from decent down to unspeakable; most communicate in the uniform lingo of the western hero, whether they're from Montana, Mexico, Texas, or California. The women, ironic and vicious, have been hard-used by men a lot like Crumley's heroes. Only one, a movie-set virago named (among other things) Suzanne Kehoe, almost takes her pound of flesh raw. A brutal boil-up of a book that sacrifices much—narrative clarity, political correctness—to Crumley's penchant for excess. As for his famous, attention-grabbing verbal intensity—well, it's all over the map, but it's there. (Author tour) Read full book review > 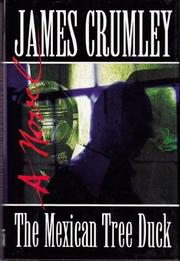 MYSTERY THRILLER
Released: Sept. 1, 1993
THE MEXICAN TREE DUCK
by James Crumley
MYSTERY THRILLER
Released: Sept. 1, 1993
THE MEXICAN TREE DUCK
by James Crumley
Crumley's first novel in ten years is a blast from the past—and not the Eighties, either. Though there's a case and a client buried here somewhere—biker lord Norman Hazelbrook hires freewheeling Montana p.i. C.W. Sughrue (Dancing Bear, etc.) to track down his vanished mom, Sarita Cisneros Pines, wife of the Republican special envoy to Mexico—both C.W.'s investigative tactics (``Questions and answers don't mean shit to me,'' he says, preferring mind-altering chemicals and sincere, rapid sex with an informative bartender, Sarita's maid, and an undercover New Mexico sheriff) and the nature of the mystery (rival Mexican gangs swiping witnesses back and forth; links to everybody who ever served with C.W. in Vietnam; dirty drug deals and salted oil wells involving the DEA, the FBI, and lesser government agencies; a zillion double-crosses) give this manic, laid- back picaresque an unmistakably Sixties feel—like an MLA panel on Ken Kesey. Scruffy C.W. is obviously meant to be irresistible this time, and maybe he is, if he's what you've been waiting for. (First printing of 50,000) Read full book review >