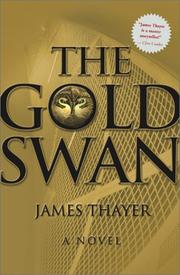 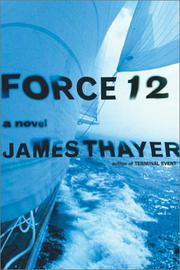 FORCE 12
by James Thayer
"A masterful, enthralling sea story to put alongside the genre's classics."
Smashing, edge-of-the-seat thriller about a gloomy rescue paratrooper with a death wish who risks all to save a monomaniacal software mogul and the mogul's ex-lover in the storm-tossed Bering Sea. Read full book review > 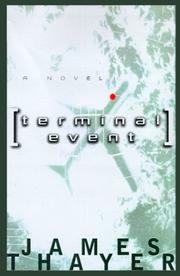 MYSTERY THRILLER
Released: June 1, 1999
TERMINAL EVENT
by James Thayer
MYSTERY THRILLER
Released: June 1, 1999
TERMINAL EVENT
by James Thayer
Superbly crafted thriller from the prolific Thayer (Five Past Midnight, 1997, etc.). "A surgeon doesn't operate on his own family members," National Transporation Safety Board site commander Richard Shrader warns former NTSB investigator Joe Durant when Durant demands his old job back. "Are you going to be able to work on the incident that killed your wife?" Durant hopes it will be good therapy for him to wander the five-mile trail of wreckage on a lonely mountainside 60 miles east of Seattle, though admittedly he doesn't look forward to finding his estranged wife among the mangled bits of aircraft and flesh. But he has another motive. A somewhat flabby engineer who plays harmonica in a blues band and loses his lunch at the sight of blood, Durant is also hoping to find out why his wife, who—d been coming to visit their 15-year-old daughter, Sarah, had left him several months before. After getting a six-month leave of absence from Boeing, he's paired with tough-as-nails FBI "priest" Linda Dillon, an unhappily married expert at prying confessions out of hardened criminals. As Thayer piles on fascinating details about crash-scene procedures and computerized duplications of the terrifying last minutes the passengers endured, he tweaks the thriller formula by giving Durant the coolest head: while Durant suspects that faulty wiring near a fuel tank produced a spark that blew up the plane, the FBI pounces on an anonymous bomber's threatening letter and goes on a multi-state manhunt for crazed Idaho militia renegades, Arab terrorists, and even a drug dealer using the plane to transport a stash of cash—red herrings all. Lucid prose and expert pacing keep the excitement high, even if the low-key climax, following so much intricately described detective work, comes off forced. A smoothly entertaining return to form after Thayer's excellent historical pastiche, Man of the Century (1997), that will make airport buyers want to miss their flights. Read full book review > 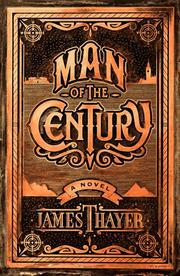 FICTION & LITERATURE
Released: Oct. 1, 1997
MAN OF THE CENTURY
by James Thayer
FICTION & LITERATURE
Released: Oct. 1, 1997
MAN OF THE CENTURY
by James Thayer
Charming, deftly amusing pastiche purporting to be the dictated memoirs of a 108-year-old scallywag who boxed, swindled, and seduced numerous historical personalities in his long life—and may even have started WW I, all while chasing the girl of his dreams. Departing from his customary gung-ho thrillers, Thayer (White Star, 1995, etc.) delivers a hilarious historical farce told through the eyes of Woodrow Lowe, a working-class Boston Irishman who, in 1879 at age 15, is smitten with the upper-class charms of Amy Balfour, daughter of the founder of the Massachusetts State Bank, when he stops the hard-drinking boxer John L. Sullivan from coldcocking her carriage horse. Amy and her snobbish brother Richard repulse Lowe's bumbling, shanty-town advances, with the grasping, mercenary Amy rudely ridiculing him. After abandoning his day job in his father's saloon, Lowe supports his nascent prizefighter's career by dusting the floor of Harvard's gym. There, on a bet, he knocks out future Rough Rider Theodore Roosevelt, who later befriends him, enlists him as a spy, and sends him out on a series of increasingly hairsbreadth (and ribald) adventures. Throughout his travels, Lowe survives by pluck and happy accidents, and even, eventually, finds true lust—in the arms of Tzu Hsi, the Empress Dowager of China. Along the way, he not only blunders up San Juan Hill with the Rough Riders but cuts a deal with Diamond Jim Brady that will enable him to avenge himself on the ever- disdainful, cruel Amy and her slimy brother. Ultimately, he gets his face carved into the whiskers of Roosevelt's moustache on Mount Rushmore. Writing in the tradition of Thomas Berger's Little Big Man, Thayer revels in the burlesque he adds to our otherwise overly romanticized past, gleefully transforming numerous well-known sacred cows—such as haughty Civil War General Philip Sheridan— into braying jackasses. In all, a breezy, impeccably researched picaresque: the best book of Thayer's career. Read full book review > 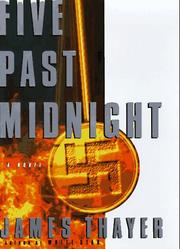 Released: Aug. 4, 1997
FIVE PAST MIDNIGHT
by James Thayer
Released: Aug. 4, 1997
FIVE PAST MIDNIGHT
by James Thayer
Old pro Thayer (White Star, 1995, etc.) delivers a fast-moving and entertaining (if fanciful) account of how Hitler met his end toward the close of WW II. Concerned that Hitler might be able to prolong an almost-over conflict from an Alpine redoubt, FDR directs the OSS to liquidate the Nazi leader. Shortly thereafter, a hardcase US Ranger named Jack Cray is incarcerated in Colditz Castle, the Wehrmacht gasthaus for flight-minded POWs. After several false starts in the spring of 1945, bilingual Jack stages a spectacular escape from the Saxony stronghold and makes his violent way across a war-torn countryside toward Berlin. An alarmed Reich Security Service frees Otto Dietrich (a virtuoso detective unjustly imprisoned by the Gestapo) to track down the one-man wrecking crew before he can complete his unknown—but predictable—mission. Once in the bombed-out capital city, Jack (who blames himself for the death of his young wife in an auto accident) joins forces with resistance operative Katrin von Tornitz, the pretty and vengeance-minded widow of an Army officer executed for complicity in a plot to assassinate Hitler. At no small cost in angst and blood, the two manage to stay one step ahead of Dietrich, who comes to admire the hired gun's resilience and resourcefulness, while death-wish Jack ascertains that his target is holed up in an underground bunker. With help from a disaffected technician who'll do anything to gain the release of his only surviving son from the Soviets, Jack sabotages the subterranean bastion's ventilation system. In the hellish confusion that ensues, the intrepid hit man breaks in on a defenseless Hitler. Before he can make it back behind his own lines, however, Jack must reach a rapprochement with the dogged Dietrich and the aristocratic von Tornitz, both of whom remain true to the Fatherland—in their fashion. A slick period-piece in the estimable tradition of Geoffrey Household's Rogue Male. Read full book review >

MYSTERY THRILLER
Released: March 1, 1995
WHITE STAR
by James Thayer
MYSTERY THRILLER
Released: March 1, 1995
WHITE STAR
by James Thayer
A revenge yarn and thriller that will have readers rolling their eyes—when they're not on the edge of their seats. Assistant US Attorney Owen Gray is not a man to trifle with. As if toting a lawyer's briefcase weren't enough of a burden, Owen also carries a considerable amount of emotional baggage. A Vietnam vet, Owen was the Marine Corp's greatest sniper, who left his namesake signature—a white origami star—next to each of his 96 kills. While this remarkable proficiency earned many honors, Owen sought to put it all behind him in exchange for something resembling a normal life. However, 20 years later, the past comes back like a crimson bolt out of the blue when some recently acquitted federal defendants are plugged in plain view of Owen and dozens of TV cameras by a mysterious sniper. After a little investigation with his NYPD buddy, Detective Pete Coates, they find no gunman, just another mysterious calling card in a red bullet casing. Obviously, someone is trying to tell Owen something. That someone is Nikolai Trusov, the former Soviet Union's answer to White Star. A veteran of several wars, most notably in Afghanistan, Trusov has not fared nearly as well as Owen. He's still got a lot on his head, including a deep bullet wound to the forehead— courtesy of a past brush with Owen back in Nam. Eventually, through a series of skillfully planned events, Trusov sets up a final showdown with Owen on the latter's rugged Idaho home turf. During this relentlessly brutal blood match, we learn a lot of things, including new uses for dying porcupines and dead hippies. But mostly, we learn that Owen can't put his past to rest until he ices the big Russkie lug. As implausible as this whole saga seems, it is carried by Thayer's (Ringer, 1988, etc.) streamlined prose and near-masterful control of detail and setting, which make this a particularly enjoyable and unpredictable read. Read full book review >