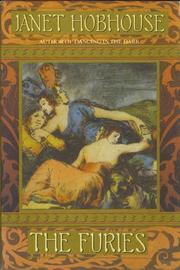 FICTION & LITERATURE
Released: Jan. 1, 1993
THE FURIES
by Janet Hobhouse
FICTION & LITERATURE
Released: Jan. 1, 1993
THE FURIES
by Janet Hobhouse
The fates, in this posthumous novel by Hobhouse (November, 1986; Dancing in the Dark, 1983, etc.), are challenged—and if not chastened, at least subdued—as a young woman confronts a family legacy of abandonment. Narrator Helen is the last of a long line of women in a New York family who've left home because they hated their mothers, with varying success trying to make their own lives. Daughter of the beautiful Bett, who quarreled with her mother, Emma, and then made a brief marriage to an Englishman, Helen recalls a childhood spent avoiding her mother's creditors; a Dickensian boarding school; Bett's depressions, and her inability to hold a job or a man for long. Loving her mother deeply and uncritically, Helen tries to protect Bett, but adolescence, always the bad fairy, changes things. Irritated by her mother, who now seems merely pathetic, Helen goes to England to live with her father—an event that begins a lengthy period of bi-continental living: she attends Oxford, falls in love with the brilliant, wealthy Edward, returns to New York and Bett, but then it's back to Edward and London. Helen marries Edward, who joins the wanderings; writes books; and tries to cope with Bett, who's increasingly depressed. After Bett's suicide, Helen suffers a number of bizarre accidents, divorces Edward, and feels that Bett, even in death, is making claims on her (``I was Bett's sister/daughter again, dark, depressed, and eventually suicidal''). But winter on Cape Cod, and a near-fatal brush with cancer, bring peace—and an epiphany of bathetic familiarity: ``I'd loved a lot, and I'd been loved, and in the end that was all that mattered.'' Elegant writing, but, sadly, Hobhouse, better at telling than showing, has written a novel of just ideas—and not much else. Read full book review >