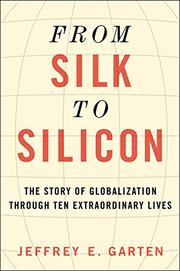 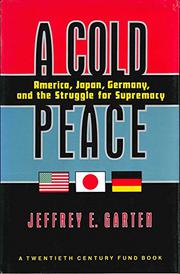 HISTORY
Released: July 1, 1992
A COLD PEACE: AMERICA, JAPAN, GERMANY, AND THE STRUGGLE FOR SUPREMACY
by Jeffrey E. Garten
HISTORY
Released: July 1, 1992
A COLD PEACE: AMERICA, JAPAN, GERMANY, AND THE STRUGGLE FOR SUPREMACY
by Jeffrey E. Garten
An attempt to probe future relations between the US, Japan, and Germany. Garten, who held senior posts at the White House and State Department during the Nixon, Ford, and Carter Administrations, is now an investment banker. ``History has been in a deep freeze since 1945,'' Garten says, ``and the thaw is occurring before our eyes.'' The most dangerous consequence, he argues, is that the long-term tractability of Germany and Japan is changing—a treacherous situation given the declining economic strength of the US in relation to both nations. Between 1950 and 1990, Garten points out, Japan's share of the world's GNP rose from 5 to 16 percent, while Germany's share of the European Community budget is now twice that of the UK and France combined. The author is particularly good on the historical sources of this strength, finding its origins in the determinations of both Bismarck and the Meiji leaders to use accelerated economic development to build their respective nations. Neither Japan nor Germany, Garten says, has permitted conflict between rival centers of constitutional power—as has the US; neither suffers from historical antagonisms between government and business; and, unlike the US, both tend to be far-seeing in planning, to invest deeply, and to spare capital gains from taxation. The potential for conflict is likely to be particularly severe, the author finds, in the late 1990's, as the huge investments made by Japan in new technology come to fruition. Perhaps because of his historical and cultural approach, Garten disappoints with his solutions, which seldom depart from the general and formulaic. ``A new sense of community,'' ``a leader who is not afraid to talk about the country's deep-seated problems,'' and outrage over the salaries of corporate executives are hardly going to do the job. A thoughtful and often excellent analysis, calling for tough decisions but failing to come up with tough prescriptions. Read full book review >