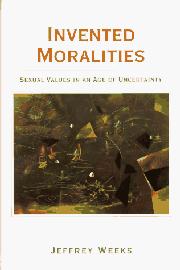 NON-FICTION
Released: Oct. 19, 1995
INVENTED MORALITIES: SEXUAL VALUES IN AN AGE OF UNCERTAINTY
by Jeffrey Weeks
NON-FICTION
Released: Oct. 19, 1995
INVENTED MORALITIES: SEXUAL VALUES IN AN AGE OF UNCERTAINTY
by Jeffrey Weeks
A refreshing and sharp theoretical contribution to a politically burdened debate. Weeks (Sociology/South Bank Univ., England) assumes the daunting task of theorizing morality, values, and sexuality. Noting the widespread sense of uncertainty and the lack of shared values and community with which most Western people live, Weeks believes a discussion of morality is more important now than ever. He draws on many important thinkers, among them Susan Sontag and Michel Foucault, to examine the current state of crisis. Weeks sees AIDS as symbolizing a general sense of doom, as well as the complexities of contemporary identities, sexual relationships, and new solidarities between people affected by the virus. He concedes that the modern world is one of contingency, in which choice can be a burden and decisions are not always easy. As for living with diversity, particularly sexual, Weeks makes an important distinction between tolerating diversity (a passive response to difference) and embracing it (welcoming difference). The challenge then becomes to accept diversity without succumbing to absolute relativism, which Weeks believes leads individuals toward isolation once again. Without prescribing a particular morality, and certainly without outlining all the answers to living with diversity, the author proposes an ethics of love based on four principles: care, responsibility, respect, and knowledge. A responsible love, for example, is based on the recognition that what one does has consequences for others. Safe sex, then, can be seen as the building of respect for self and others, a public and private response to AIDS, and an active way of ``recovering the erotic.'' When based on this ethic of love, many forms of erotic life can be morally valid. Weeks succeeds in suggesting values for a moral society that must live with diversity, and he presents a hopeful vision of a world community based on an ethics of love. Read full book review >