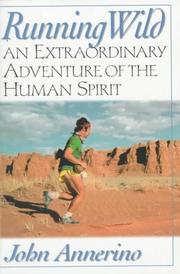 NON-FICTION
Released: April 1, 1998
RUNNING WILD: AN EXTRAORDINARY ADVENTURE OF THE HUMAN SPIRIT
by John Annerino
NON-FICTION
Released: April 1, 1998
RUNNING WILD: AN EXTRAORDINARY ADVENTURE OF THE HUMAN SPIRIT
by John Annerino
A runner's chronicle of adventures in the Grand Canyon and other desert locales. Annerino, the author of several books about the Southwest, recounts his years of recovery from a mid-1970s climbing accident, after which doctors doubted he would walk freely again. His recovery and 'spiritual and mental renewal— came from running, first short distances, then, inspired by tales of southwestern Indian runners who covered a hundred miles in a single day, longer and longer stretches of ground. Eventually he was able to cross such places as the Gran Desierto of northwestern Mexico, —the largest sand sea in North America,— and even to run a complicated and dangerous 250-mile-long course along the North Rim of the Grand Canyon. On a technical level, his memoir will be of interest to runners planning large-scale adventures of their own; Annerino excels at detailing the logistical difficulties of maintaining communication and establishing points of resupply, and he writes tellingly of the less tangible difficulties, among them loneliness, fear, cold, and, of course, heat. (The appendix, which describes a series of difficult desert runs, is especially useful.) His book will also be of interest to those working to overcome injury, as the author has so successfully done. Annerino is least successful when he strives to be poetic (—My feet continue padding softly across the desert floor, sending up powdery wisps of dust with each footfall. I suck wind in, I blow air out—). He also refers rather too often, and rather too bathetically, to a failed marriage, the unhappy details of which we did not need to know. Of small interest outside the sports and adventure-travel market, this is a generally well-written and even inspirational vade mecum. Read full book review >