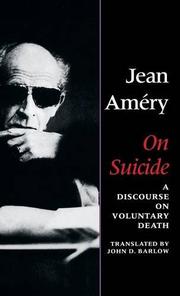 NON-FICTION
Released: Sept. 1, 1999
ON SUICIDE: A DISCOURSE ON VOLUNTARY DEATH
by Jean Améry, translated by John D. Barlow
NON-FICTION
Released: Sept. 1, 1999
ON SUICIDE: A DISCOURSE ON VOLUNTARY DEATH
by Jean Améry, translated by John D. Barlow
Five personal and philosophical essays that are highly insightful, poetic, if sometimes murky stylistically, metaphysically challenging, yet ultimately unsatisfying. AmÇry (nÇ Hans Maier) was an Austrian-born Jew who migrated to Belgium and who joined the anti-Nazi resistance. He wrote an account of torture, Beyond the Mind's Limits, as well as On Aging (1994). The present book was written during the late 1970s between an unsuccessful and a successful suicide attempt. His interest is on the taking of one's own life not so much as an act, but rather as a "project" of individual thought and will that defies sociological and psychological truisms. Borrowing a concept from Jean-Paul Sartre, AmÇry helps us understand the sensibility of the suicide as someone who feels compelled to take his or her life in response to an Çchec, or irreversible personal disaster. The person with a "suicidal constitution," AmÇry notes in a typically intense passage, is moved by "disgust with the world, claustrophobia from the four walls closing in on each other as one hammers one's head against them." Serious problems arise, however, when AmÇry attempts to go beyond understanding the suicidal mentality to justifying the suicidal act. In his introduction, translator Barlow notes that AmÇry's approach is revealed by the very German word he uses for suicide, not the customary Selbstmord (literally, "self-murder") but rather Freitod ("voluntary death"). In approaching suicide as an act of liberation, he sometimes writes in downright romantic terms about the ultimate act of self-destruction——we only arrive at ourselves in a freely chosen death." Simultaneously, AmÇry is dismissive, even contemptuous, of what he calls "ridiculously everyday life and its alienation." More disturbing yet, he writes of suicide almost as if the act took place in an interpersonal vacuum. In short, AmÇry's legacy in this, his last work, is to provide us with a moving, deep series of insights into the suicide's world, but an unconvincing attempt to normalize the suicide's leap of despair. Read full book review >