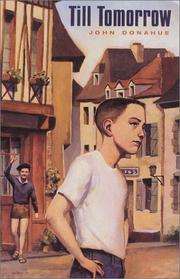 CHILDREN'S
Released: Sept. 21, 2001
TILL TOMORROW
by John Donahue
CHILDREN'S
Released: Sept. 21, 2001
TILL TOMORROW
by John Donahue
It's the summer of 1961, and the tensions in divided Berlin are leading to fears of World War III. For Terrence O'Brien, the 12-year-old son of an American army officer, the anxiety and unease become part of his daily life when his father is assigned to a base near Verdun, France. O.B., as he is called, had enjoyed life in Boston where he had friends, grandparents, and baseball. Now, uprooted one more time, he has to adjust to life in an insular French town where people must still walk carefully to avoid the thousands of live mines left unexploded in the WWI battlefield. O.B.'s parents are supportive and gently encourage him to try out for the army's little-league baseball team, but he doesn't make the cut. The army brats his age, led by Cannonball (so named for his spectacular pool dives), are all on the team and O.B. wants to be part of their group. At the same time, he is drawn to a local French boy named Claude, whom Cannonball loves to ridicule. Claude is musical and doesn't like baseball. The inner conflict that besets O.B.—wanting to fit in with the American kids and really liking Claude—drives this gentle story. O.B. chickens out of entering a church to hear Claude's recital because Cannonball and the other boys are nearby. But in a dramatic climax, it is quiet Claude whose courage and sensibility saves the lives of the American boys who have wandered dangerously close to the battlefield. Donahue (An Island Far from Home, not reviewed) warmly conveys a feeling for life on the base and in France at this time. O.B. is realistic and appealing in that he is not always strong enough to face ridicule and exclusion from Cannonball and his group. As Claude puts it, friends say a demain—until tomorrow—and that is how these boys will spend their time together. (Fiction. 8-12)Read full book review >