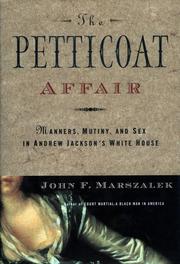 BIOGRAPHY & MEMOIR
Released: Jan. 22, 1998
THE PETTICOAT AFFAIR: MANNERS, SEX, AND MUTINY IN ANDREW JACKSON'S WHITE HOUSE
by John F. Marszalek
BIOGRAPHY & MEMOIR
Released: Jan. 22, 1998
THE PETTICOAT AFFAIR: MANNERS, SEX, AND MUTINY IN ANDREW JACKSON'S WHITE HOUSE
by John F. Marszalek
From Marszalek (History/Mississippi State Univ.; Sherman, 1992, etc.), a vivid evocation of a dramatic episode that preoccupied and temporarily crippled the Jackson administration. More than 160 years before Paula Jones and Gennifer Flowers, America's first sex scandal, the Peggy Eaton affair (182931), rocked the White House. Newly elected Andrew Jackson was a controversial figure and no stranger to scandal; he'd killed a man in a duel, wedded another man's wife before her divorce was final, executed two British civilians in an extralegal military action in Florida, and massacred hundreds of Indian women and children in frontier battles. Marszalek shows how Jackson's frequent encounters with scandal had made him proud, rigid, and quick to take offense. His wife Rachel's death soon after the 1828 election, thought to have been brought about by the vicious attacks on her character, filled the grief-stricken Jackson with righteous anger, and when Washington gossips snubbed the vivacious young Peggy Eaton, wife of Jackson's secretary of war, Jackson vigorously sprang to her defense. Peggy, the widow of a navy purser who allegedly consorted with John Eaton while her husband was at sea and married him before the requisite mourning period expired, was thought to have low morals, although Marszalek argues that her real offenses were her low social origins and her unfeminine, ``forward'' behavior with men. What began as an act of social ostracism ultimately polarized the Jackson cabinet, resulted in a fatal estrangement between the president and vice president (Calhoun's wife led the ostracism of Peggy), and caused the resignation and reorganization of Jackson's cabinet, leaving the presidential aspirations of Calhoun a shambles and positioning Martin Van Buren to succeed Jackson. Marszalek's absorbing narrative illuminates how much, and how little, Washington and American society have changed: The small- mindedness and sexism of Washington's matrons, and the punctilious protectiveness of the president, would be inconceivable today, but the vicious nature of political rumormongering and scandal in Washington remains. Read full book review > 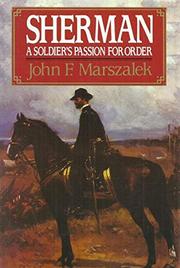 BIOGRAPHY & MEMOIR
Released: Nov. 30, 1992
SHERMAN: A SOLDIER'S PASSION FOR ORDER
by John F. Marszalek
BIOGRAPHY & MEMOIR
Released: Nov. 30, 1992
SHERMAN: A SOLDIER'S PASSION FOR ORDER
by John F. Marszalek
An exhaustive but engaging biography that plumbs the personality of William Tecumseh Sherman—and attempts to explain the Civil War general's personal and military decisions as arising from a psychological need for order and control. Marszalek (History/Mississippi State Univ.) contends that Sherman's rootless childhood—he lost his father at age nine and endured a separation thereafter from his mother and his siblings, while a charitable neighbor, Thomas Ewing, raised him—instilled in him an abhorrence of uncertainty and a craving for control. Sherman's letters make clear his ambivalent feelings about Ewing, mixing gratitude with a determination to make his way in life while taking charity from no one else. The Army, which offered an education without cost and advancement based solely on personal merit, made West Point an obvious goal for the young Sherman. While there's documentary evidence to support Marszalek's thesis about the psychological roots of Sherman's need for independence, the author is less convincing when he speculates that almost every personal and military act by Sherman—from his frequently absenting himself from his marriage to Ellen Ewing, his foster father's daughter, to his decision to fight for the Union despite his having lived in, and loved, the South—arose from his passion for stability. Much of Sherman's life can be explained simply by the fact that the general loved, and excelled in, the Army from the beginning, and revered the Union. Sherman was a born soldier, and during his brief periods as a civilian he seemed restless and dissatisfied. Finally, Marszalek argues persuasively that Sherman's scorched-earth tactics arose from his experience fighting the Seminoles in Florida, where he witnessed for the first time a war not between armies but between societies. Despite his sometimes heavy-handed psychobiographical theme, Marszalek succeeds in making this gruff, complex warrior come alive. Read full book review >