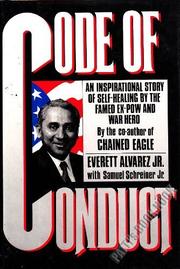 NON-FICTION
Released: Dec. 16, 1991
CODE OF CONDUCT
by Jr. Alvarez, Jr. Schreiner
NON-FICTION
Released: Dec. 16, 1991
CODE OF CONDUCT
by Jr. Alvarez, Jr. Schreiner
What it was like to return to civilian life after eight and a half years as a POW, told blandly by Alvarez (Chained Eagle, YA, 1989—not reviewed), with help from Schreiner (A Place Called Princeton, 1984, etc.). Alvarez was the first US flyer shot down in Vietnam, and on his return in 1973 he was welcomed as so many Vietnam vets were- -finding himself alone (his wife divorced him during his captivity), living behind ``a plexiglass emotional shield'' in a country so divided that he was at odds with his mother and antiwar activist sister. His tale here is one of reconstruction and success, lacking the intensity, drama, and terror of most veterans' memoirs because Alvarez seems first and foremost a tough, levelheaded man, a survivor who was recognized in prison as a leader and a source of strength. An engineer by training, later an attorney, he took his role as an officer and his code of conduct with ultimate seriousness, he says, and was sustained by them. (He notes that POWs as a group did well in readjusting to civilian life.) The profound disruption and deep reassessments one expects are not here; nor is Alvarez's Hispanic heritage a prevailing concern. Far more prominent are his natural gravitation to high circles of power and his long relationship with President and Nancy Reagan and their associates. With his obvious capabilities, conservative bent, and practicality, Alvarez shrugs off misunderstandings (including a funny one with agent Swifty Lazar) and gets on with his life, first as deputy director of the Peace Corps, then in a similar position in the Veterans Administration, then as a Beltway entrepreneur. What we don't get is any close scrutiny of the how and why of Vietnam and its deeper effects on either veterans or this country. Lifeless prose in a memoir that also lacks the excitement, drive, and focus of self-discovery. (Photographs—not seen.) Read full book review >