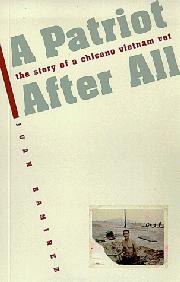 HISTORY
Released: March 1, 1999
A PATRIOT AFTER ALL: THE STORY OF A CHICANO VIETNAM VET
by Juan Ramirez
HISTORY
Released: March 1, 1999
A PATRIOT AFTER ALL: THE STORY OF A CHICANO VIETNAM VET
by Juan Ramirez
paper 0-8263-1959-9 An introspective memoir in which the first-time author bluntly and self-critically examines his life before, during, and after his service in Vietnam. Ramirez grew up in a middle-class Mexican-American household in northern California. At 18, he enlisted in the Marine Corps, served two brutal tours in Vietnam, and came home extremely embittered. In Vietnam "I lost almost everything I knew and believed in," Ramirez says. "I lost my innocence, I lost my faith, I lost my own family, I lost my patriotism and national pride, and I lost what little self-respect I had." Life after Vietnam became an emotional roller coaster during which Ramirez drank and used drugs to excess, committed various crimes, and abused his wife. He also tried suicide. After many attempts at counseling, the author stopped drinking in1983, and today leads a productive life, with his own landscaping business. This redemptive story, originally written in 1986 as an undergraduate thesis, also served him as a form of much-needed therapy. "Working on this book was a necessary spiritual journey," Ramirez reports, "it wasn't just rehashing my life, it was coming to terms with my life." He directly addresses the darkest side of his wartime and postwar experiences, reeling off instance after instance of his own antisocial and self-destructive behavior. "I had," he notes, "many moments when I was a complete jerk and idiot." This seeming guilelessness is one of the book's strong points. Another is Ramirez's well-crafted section on his family and Mexican roots, a rarity among Vietnam War memoirs. He ends with a convincing plea that his serious maladjustment problems should not add to the already "damaging myths about the Vietnam veteran." An unusual look at the war and its consequences. (3 photos, not seen) Read full book review >