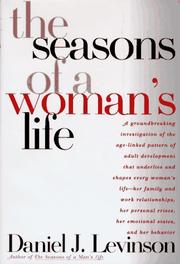 NON-FICTION
Released: Jan. 26, 1996
THE SEASONS OF A WOMAN'S LIFE
by Daniel J. Levinson, Judy D. Levinson
NON-FICTION
Released: Jan. 26, 1996
THE SEASONS OF A WOMAN'S LIFE
by Daniel J. Levinson, Judy D. Levinson
Interpretations of women's life histories support the hypothesis that the road through adulthood is a series of developmental construction zones, relieved only rarely by a measured mile of achievement-related superhighway. The early work of Yale psychologist Daniel J. Levinson fell in the shadow of Gail Sheehy's 1970s bestseller, Passages, which drew on research for Levinson's respected (but not bestselling) study of adult male psychological development (The Seasons of a Man's Life, 1978). Nearly two decades later, this new volume, polished and edited by wife Judy after Levinson's death in 1994, offers a map of women's adult development. (Judy Levinson also deserves much of the credit for analyzing the many interviews and identifying life stages.) Levinson's primary subjects were 45 housewives, corporate achievers, and academics, ages 35 to 45, from whose lives he teased patterns of development. In the approximately 40 years from the end of adolescence to the final phase of middle adulthood, Levinson identifies eight periods, beginning with the transition from adolescence to early adulthood and proceeding through building an early life structure (comprising choices about marriage and family, occupation, separation from parents, and lifestyle), a mid-era transition involving reappraisal, and a culminating life structure, which allows breathing space to enjoy one's new status before moving on to the next transition. The Levinsons extrapolate to later life stages, which are said to follow the same pattern. Levinson somewhat naively expresses his surprise at ``the extent and power of the differences'' between men and women, which he attributes to society's splitting of gender roles, although he does predict a slow and lengthy evolution toward ``gender equality.'' Probably too little too late, but read it for the stimulating early and ending chapters, which argue convincingly that the tumultuous eras marking the decades from 20 to 50 are part of a struggle to maturity that men and women share. (First printing of 30,000) Read full book review >