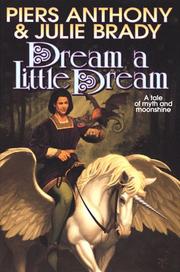 SCIENCE FICTION & FANTASY
Released: Jan. 12, 1999
DREAM A LITTLE DREAM
by Piers Anthony, Julie Brady
SCIENCE FICTION & FANTASY
Released: Jan. 12, 1999
DREAM A LITTLE DREAM
by Piers Anthony, Julie Brady
Independent fantasy from the prolific Anthony (most recently, Zombie Lover, p. 1075) and newcomer/collaborator Brady. Trapped in an abusive relationship with her rape/violence-prone partner, Nola Rollins takes refuge inside her serial, lucid dreams, where she visits an elaborate dreamscape called Kafka. Complete with the usual fantasy trappings, Kafka does however lack cockroaches, castles, trials, and whatnot. Unknowingly, Nola is a Creator'she's actually dreamed certain aspects of Kafka into existence. But now evil creatures called Frens, led by their baneful wizard King Reility, have dammed the River of Thought (it's composed of human dreams: Kafka's inhabitants can't dream) with indestructible dreamstone, and all of Kafka will die. Only Creators can dissolve dreamstone. So Mich, son of King Erik, travels to Earth along with Esprit, a winged black unicorn (Nola's dreamed both Mich and Esprit) to obtain Nola's help. Once she accepts the fact of Mich and Esprit being real, Nola agrees to travel to Kafka and help remove the dam. After various adventures—things don't go entirely according to plan—they return to Earth to add Tina to their group: a down-and-out street kid, Tina has also Created part of Kafka. Once back in that land, they learn that King Erik has vanished and the situation is getting worse. All Nola has to do is believe in Kafka and disbelieve in the Frens and their dreamstone dam. Of course, what with the will-they won't-they Nola/Mich romance, it's not as easy as that, and various complications ensue. Conventional ideas given a breezy, well-rounded workout: standard fare for Anthony fans. Read full book review >