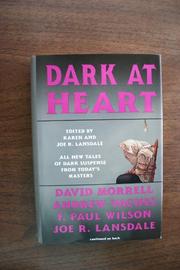 FICTION & LITERATURE
Released: April 15, 1992
DARK AT HEART
edited by Karen Lansdale, Joe R. Lansdale
FICTION & LITERATURE
Released: April 15, 1992
DARK AT HEART
edited by Karen Lansdale, Joe R. Lansdale
``Dark Crime. Dark suspense. Stories of that nature will be for the nineties what horror was for the eighties.'' Let's hope not, actually, if this introductory prediction by the editors pans out into the kind of flat, monotonic tales predominately on display here. The trouble surfaces in Joe R. Lansdale's leadoff story, whose tantalizing title, ``The Events Concerning a Nude Fold-Out Found in a Harlequin Romance,'' gives way to a brisk but standard yarn in which a clerk battles a maniac—a dullish outing for an author whose splatterpunk work has raged with moral fire. F. Paul Wilson is up next, with ``The Long Way Home,'' again a well-crafted tale, this one about a legendary vigilante, but again one with no real idea behind it. And so it goes with stories by Neal Barrett, Jr. (a hit man), Steven Rasnic Tem (home-invasion terror), Lewis Shiner (a patsy's vengeance), Chet Williamson (subway mayhem), William F. Nolan (a serial killer), and David Morrell, whose concluding novella, ``The Shrine,'' strikes an oddly maudlin note in its depiction of a sheriff mourning his dead family. A few tales do prick—Andrew Vachss's ``Treatment,'' reiterating his perpetual vengeance-against-abusers theme with fine irony; Bill Crider's ``An Evening Out with Carl,'' which plays a dirty trick on a rapist; and Thomas Sullivan's spookily moving ``Deep Down Under,'' about a little girl caught in a plane crash. And there is Ed Gorman's exceptionally haunting ``The Long Silence After,'' in which an AIDS victim stalks his infector. But why, of these 20 original stories, do so few resonate beneath their tempered macho glaze? Surely in part because only one woman writer appears here: Ardath Mayhar, whose ``fiction,'' the editors assure us, ``is often quite unladylike''—presumably as in her cleverly nasty but slight entry, ``Aunt Dolly.'' What might have been a groundbreaking anthology, a Dark Forces of crime fiction, proves nothing more than a competent but uninspired anthology with no cutting edge. Read full book review >