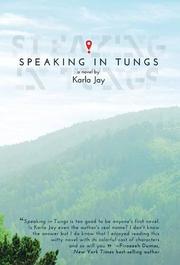 FICTION & LITERATURE
Released: May 14, 2015
Reviewed: Oct. 13, 2015
SPEAKING IN TUNGS
by Karla Jay
FICTION & LITERATURE
Released: May 14, 2015
SPEAKING IN TUNGS
by Karla Jay
"An often intriguing story, despite a few too many plot elements, that shows the disparate ways that speech therapy can help people regain their voices."
In Jay's debut novel, a speech therapist moves to the small town of Tungston, Pennsylvania—locally known as "Tungs"—and finds colorful characters and a little mystery. Read full book review > 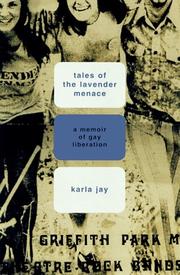 NON-FICTION
Released: March 1, 1999
TALES OF THE LAVENDER MENACE
by Karla Jay
NON-FICTION
Released: March 1, 1999
TALES OF THE LAVENDER MENACE
by Karla Jay
Oh, to be young and a radical lesbian in the late 1960s and early '70s—here is a sharp and funny account of what it was like. The author (Women's Studies/Pace Univ.; co-author, Out of the Closet, not reviewed, etc.) was "a nice, Jewish girl from Brooklyn" attending Barnard College in the 1960s. Growing up with a mentally ill mother given to hallucinations, rages, and depression had driven her from home but not out of the closet. Jolted by the Columbia University student uprisings in 1968, she marched with antiwar and civil rights protesters—and began exploring her lesbian inclinations at Greenwich Village bars. She also began to be drawn to the fledgling women's liberation movement, joining the radical feminist Redstockings and a consciousness-raising group. Also involved in the start-up of the Gay Liberation Front, she worked by day for Collier's magazine and by night for a radical publication called Rat. On the feminist front, she was part of media women's sit-in at the Ladies Home Journal and organized an "ogle-in" on Wall Street, where a group of women whistled and commented on men's physical attributes as the bankers and brokers emerged from the subway. She also helped organize the "Lavender Menace" action (the term is Betty Friedan's) that set lesbian interests on the agenda of the feminist movement. Exhausted, ill, and frightened because her phone was tapped, she took off for California, for a summer dominated by beaches, bars, sex, and minimal gay politics. This marked the beginning of a withdrawal from activism and the start of her trek to tenure. Jay's action-packed stories are often accompanied by reflective analysis, including why many feminists resisted, and continue to resist, lesbians in the movement. Thoughtful, witty and informative, this memoir captures the fervor and exuberance of those years when young idealists stenciled T-shirts and marched to change the world—and perhaps they did. (8 pages photos, not seen) Read full book review > 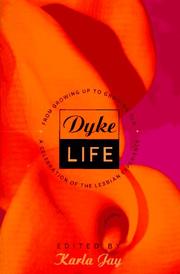