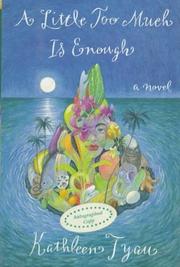 FICTION & LITERATURE
Released: July 1, 1995
A LITTLE TOO MUCH IS ENOUGH
by Kathleen Tyau
FICTION & LITERATURE
Released: July 1, 1995
A LITTLE TOO MUCH IS ENOUGH
by Kathleen Tyau
Tender, eloquent first novel told in the many voices of an extended Chinese-Hawaiian family. Tyau opens with a mother holding her wakeful infant, a girl named Mahealani (full-moon night), and anticipating the day her baby will leave for college. In succeeding chapters, we hear the daughter, nicknamed Mahi, ruminating on the thick lips that are the only Hawaiian trait she got from her father, Kuhio; Kuhio talking as he mixes thick poi paste using virtually his whole body; the Hawaiian grandmother, or tutu, dancing her history in a hula, talking with her hands; the Chinese grandmother, Popo, reminiscing about her early life while making sticky rice cakes. The characters' recollections of the dead Chinese grandfather, Goong- Goong, are especially poignant: Breaking the stereotype of timid first-generation Asian immigrants, he was a joyous physical presence, a surfer who carried his granddaughter on his shoulders. The author's gift for immediacy and intimacy serves the story well. The family is a lively, vivid bunch, sensually greedy at luaus and Chinese nine-course wedding banquets (hence the title). Meanwhile, there are conflicts: A drunken, newly divorced sister tells Mahi's mother that she won't see her 50th wedding anniversary either; Mahi's brother wants to serve in Vietnam; and in one scene Kuhio confesses that he wants to take a lover. The author heartrendingly conveys throughout the theme of losing paradise: Two especially beautiful chapters show a Hawaiian neighbor mourning for his male companion and Mahi's Hawaiian godmother expressing her understanding of why the girl must leave the islands. These loosely connected vignettes, however, don't build to a climax; the middle bogs down, and the narrative has a certain circular sameness. Tyau's considerable strengths are voice, characterization, and descriptive prose, not storytelling. Still, an impressive and important addition to a growing Hawaiian school of writers. Read full book review >