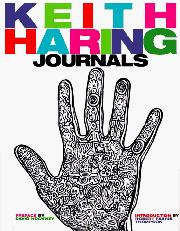 NONFICTION
Released: July 1, 1996
KEITH HARING: JOURNALS
by Keith Haring
NONFICTION
Released: July 1, 1996
KEITH HARING: JOURNALS
by Keith Haring
Recorded in sporadic bursts at various points in his brief career, these journals attest more to the late artist's amazing industry than to his analytical or descriptive powers. Early entries, from 1978 to 1980, show Haring the adolescent Deadhead arriving in New York and laying out an aesthetic program. Pages of word associations and sophomoric aphorisms about the role of art are of interest purely as juvenilia, but Haring discusses with remarkable self-assurance his desire to make art accessible to the general public: ``There is an audience that is being ignored, but they are not necessarily ignorant. They are open to art when it is open to them.'' From 1980 to 1985, Haring found his trademark cartoon-graffiti style, famously began drawing on blank advertising panels in New York City subway stations, and rapidly became the most Pop and popular of artists, his work proliferating on T-shirts, posters, and urban murals. Unfortunately, however, Haring wrote almost nothing during his transition from eager student to international celebrity. The journals resume as a record of trips abroad to oversee exhibitions, and to create artworks and a store in Tokyo, but lively anecdotes are in short supply. The virtual absence of editorial notes, irritating throughout, seems almost malicious after chronological caesurae, for few of the fellow artists, dealers, friends, and stray acquaintances Haring mentions are identified even with a surname. Haring's whirlwind activity is shadowed by deaths—Andy Warhol's inspires a splendid, moving discussion of Pop Art and Warhol's relationship with Haring as mentor, friend, and artistic compatriot. As Haring's own health began failing (he died of AIDS in 1990, at age 31), he took more delight in mundane details, poignantly writing in 1989, ``Every time I come to Europe I think I'm going to live forever.'' Fragmentary, not particularly enlightening, and lacking notes, these journals offer limited rewards even to the Haring aficionado. (illustrations, not seen) (Book-of-the-Month Club selection) Read full book review >