Edit my Pro Profile
Publish my Pro profile
Books by Kendrick A. Clements 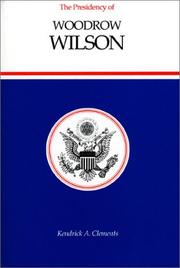 BIOGRAPHY & MEMOIR
Released: March 15, 1992
THE PRESIDENCY OF WOODROW WILSON
by Kendrick A. Clements
BIOGRAPHY & MEMOIR
Released: March 15, 1992
THE PRESIDENCY OF WOODROW WILSON
by Kendrick A. Clements
Smoothly written if not penetrating account of how an exceptional chief executive enlarged the presidency in a period of intense national growth and change; by Clements (History/Univ. of South Carolina). Detailed and balanced, this study makes clear Wilson's grasp of his times and his capacity for convincing other Americans of his rightness. Clements traces that sense of rightness back to a family full of practical southern Protestant ministers, believers in service—a notion Wilson expanded to connect religion with patriotism. The result was a can-do leader in domestic affairs, an extremely gifted politician able to work deals, compromise, and create respect in Congress, which by and large cooperated in a reformist agenda that created the Federal Reserve, took steps to deal with social effects of industrialization, reduced the tariff, created the income tax to replace those lost revenues, and tightened government control of business, beginning with child labor laws. But the orderly progression and style of this book do not suggest the scope of Wilson's vision, his passion, his moral stance, and how these enabled him to powerfully sway Americans, if not Europeans. The other players are a bit lifeless as well, which leads to an impersonal, sanitized study. Wilson the man was deeper, craftier, more complex, and more driven than seen here, and his leadership cannot be separated from these qualities. The harrowing failure at Versailles, the death-struggle over the League of Nations with Senator Henry Cabot Lodge, and Wilson's final, driving, self-destructive effort to impose his will on an America eager for Harding's ``normalcy''—all deserve deeper scrutiny and analysis. The tragic denouement following his stroke—the ``stewardship'' by Mrs. Wilson and Col. House—is as murky as ever, except in its implications regarding transfer of power in such a crisis, insufficiently explored here. A finely detailed, almost too specialized, and nonjudgmental account, not very urgent or thought-provoking. Read full book review >