Connect with Kenneth B. Andersen

Kenneth B. Andersen is a full-time writer of MG/YA Fantasy, Sci-Fi and Horror including THE GREAT DEVIL WAR series and THE ANTBOY series. Since his debut in 2000 Kenneth has published more than forty books and he is one of the most popular and praised YA writers in Denmark. His books have been translated into more than 15 languages and his hit series about the superhero Antboy has been turned into three movies. A musical version of THE DEVIL'S APPRENTICE opened in the fall 2018. Kenneth has received numerous awards for his work, including the Karen Blixen Award, the BMF Award, the ORLA Award (twice), and he has been on the Danish Ministry Culture's Honor List (twice). Kenneth lives in Copenhagen with his wife, two boys, a dog named Milo and spiders in the basement. 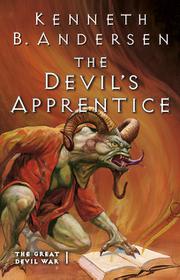 In Andersen’s YA fantasy series opener, translated from the Danish by Semmel, a teenager enters hell and unwillingly trains to become its ruler.

As the story opens, 13-year-old Philip Engel is hiding in his school’s basement because Sam, an older, inventively cruel bully, has dubbed him his “Condemned of the Week.” Thankfully, the school’s janitor intervenes before Sam can harm him. Later, on his way home, Philip rescues a black cat stuck in a tree: “Thanks for helping me out,” the cat says, to Philip’s amazement. Then Sam catches up with his victim and pushes him into a crosswalk—and in front of a car. Soon, Philip wakes up in hell, where he reunites with the talking cat, whose name is Lucifax, and heads for a castle made of bones—the lair of the devil himself. The teen learns that the devil is dying and needs to train a replacement; however, it turns out that Lucifer intended to summon Sam, not Philip. A one-time deal with Death allowed the devil to take just one boy before his time, so he must make do with Philip, who’s literally a Boy Scout. How will Philip fare when his villainy is tested? And is a young “she-devil” named Satina offering him true friendship? Philip only knows one thing for sure: that he wants to escape his apprenticeship before the devil expires. Andersen’s morally gray series opener rests on the argument that evil is, in fact, necessary. As the devil says, “We can’t see without light, but we can’t see without darkness, either. We need both to be able to navigate.” Hell is populated with colorful demons, such as Flux and Aziel, who live in hell’s grisly suburbs; on Maim Street, Philip hears “muffled screams...from the buried mouths when he trudged upon their bleeding skulls.” It’s graphic imagery, indeed, but the author manages to inject occasional silliness, such as Lucifax’s wry commentary: “Down here, humor is always dark.” Eventually, the young man must deal with teenage jealousy, along with other, more devilish traits. Andersen’s exceptional plotting ensures that its sequel will be irresistible.

GRIMM Book I & II contains 20 of the Grimm Brother's most gruesome stories, retold by Kenneth B. Andersen and Danish writer Benni Bødker. True to the original stories, but also adding new layers and depth to the plot and the characters. Contains well-known stories like Hansel & Gretel and Snow White, but also lesser known stories like The Juniper Tree and The Girl without Hands. Beautifully illustrated by John Kenn Mortensen. Published in Denmark 2019. Not yet published in English.

Inspired by the new girl in school, Peter has begun to write a fantasy story. It’s about a fortuneteller who spins a tale about a brazen thief who ventures off on a dangerous journey to save a kidnapped princess. One evening during a terrible thunderstorm the boundary between fantasy and reality dissolves: Peter becomes the protagonist of his own story, and the fortuneteller becomes the story’s writer. Now they’re forced to help each other unspool the threads in order to rescue the imprisoned king’s daughter. But that’s easier written than done … Winner of the ORLA Award 2005. Published in Denmark 2005. Not yet published in English.

Victor has a hard time at school. Especially because of Casper, who enjoys making Victor’s life miserable. But when Victor finds a very special pocket watch, his entire world changes. The watch has the power to turn back time, so that Victor can alter the past—and thus control the future. But time isn’t easy to control and neither is the anger, Victor carries. Published in Denmark in 2014. Not yet published in English.

Pelle Nerhmann is at the bottom of the schoolyard’s merciless pecking order. But when Pelle is bitten by a very special ant, his life is completely changed. He develops the most amazing powers, and he becomes the superhero Antboy. But Pelle quickly discovers that being a superhero in an ordinary small town isn’t always as exiting—or easy—as in the movies. The Antboy series (nine books total) was published in Denmark from 2007-2020. Not yet published in English.

Simon has always been in the shadow of his twin brother Tim and one night his wishes - sincerely wishes - that his brother hadn't been born. The next morning Tim has vanished and it's like he's never existed. Their parents can't remember ham, and Simon is also starting to loose the memories of his brother. He regrets his wish, but to get Tim back Simon has to enter another world. A world beyond his wildest dreams - and worst nightmares. Illustrated by Lars Gabel and receiver of The Claus Deleuran Award. Published in Denmark 2017. Not yet published in English.

The Great Devil War 2: The Die of Death

Continuing the dark and humorous adventure that begins with The Devil's Apprentice. Philip's adventures as the Devil's apprentice have changed him--in a good way. Although he misses his friends in Hell, he has made new friends in life. But when the future of the underworld is threatened once again, Philip's help is needed. Death's Die has been stolen and immortality is spreading across the globe. Philip throws himself into the search--and discovers a horrible truth about his own life along the way. Winner of the Orla Award.
Published: Oct. 15, 2018
ISBN: 9788763861632

Continuing the dark adventure that begins with The Devil's Apprentice and The Die of Death. An unfortunate chain of events makes Philip responsible for the untimely death of the school bully Sam - the Devil's original choice for an heir. Philip must return to Hell to find Sam and bring him back to life, so that fate can be restored. But trouble is stirring in Lucifer's kingdom and not even Philip can imagine the strange and dark journey that awaits him. A journey that will take him through ancient underworlds and all the way to Paradise. Winner of the BMF Award and the School Library Children's Book Award.
Published: April 5, 2019
ISBN: 9788797119709

The Great Devil War 4: The Angel of Evil

Book 4 in the multi-award winning series. Nothing will ever be the same. Satina is gone, kidnapped by the enemy. Disobeying Lucifer, Philip heads out to find her, journeying into the deep darkness of Outer Reach. But nothing can prepare Philip for the horror that awaits--or the demons he will face. Meanwhile, Lucifer's kingdom is threatened as the Great Devil War draws closer. All Hell is about to break loose...
Published: Oct. 20, 2019
ISBN: 9788797119761

It has been nearly two years since Philip left Hell and returned to his life on Earth, this time for good. But Philip is no longer the same person he used to be. He feels more lonely than ever—lonely and angry. Then one day the most unlikely thing of all happens—Philip is once again brought back to Hell. Not by the Devil this time, but by God himself. Published in Denmark 2015. Out in English May 2020.

Philip has returned to Hell, but he's not the only one who's back. An ancient evil has awoken and the Great Devil War is far from over. But this time it's not just Hell that's under attack. This time it's bigger than anyone - even God and the Devil - can imagine. This is the end. Winner of the Karen Blixen Award. Published in Denmark 2016. Out in English November 2020.

The Heart of Light

It's Jack's first summer vacation after his parents' divorce. Together with his mom and little sister Jack is going to spend the summer in an old house out in the woods. Jack is certain it's going to be the worst vacation ever, but the house turns out to be full of surprises and secrets. Jack suddenly finds himself in another world and in the center of a huge adventure. A very dangerous adventure, and Jack quickly disovers that he's not very good at being a hero. Published in Denmark 2018. Not yet published in English.