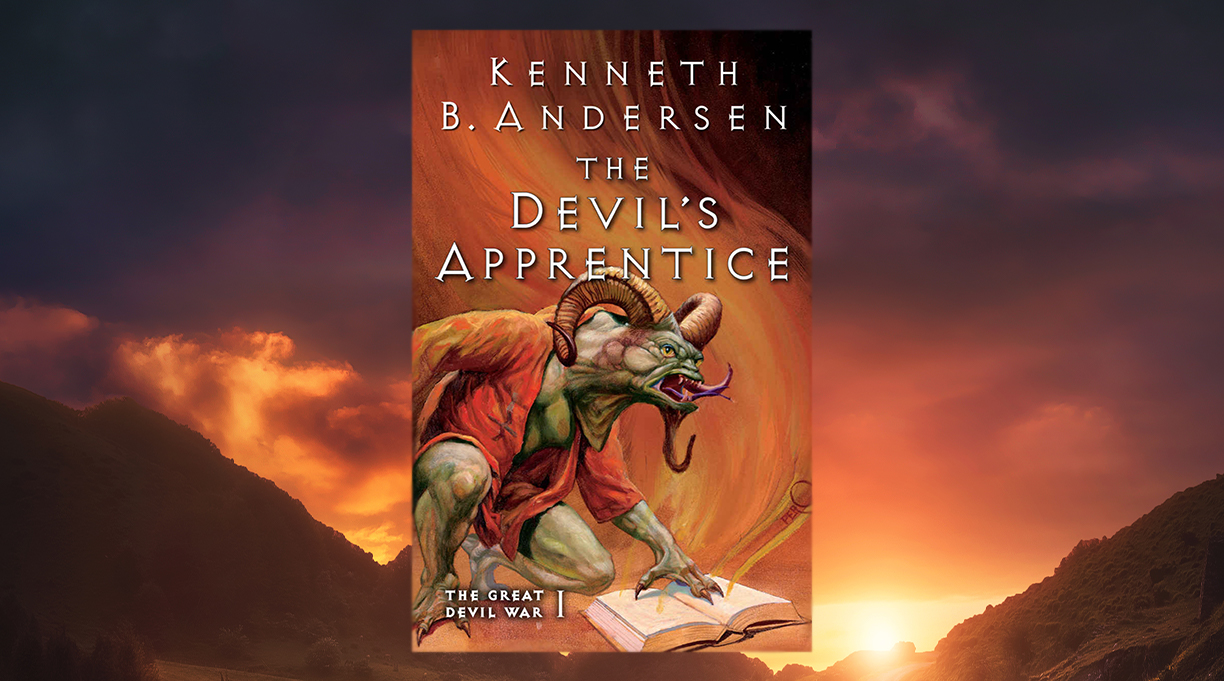 Don’t make the mistake of thinking that The Devil’s Apprentice is just another new book for young adults.

In fact, bestselling author Kenneth B. Andersen’s hit series The Great Devil War has been hugely popular in Denmark for well over a decade. This is simply the first time that The Devil’s Apprentice (along with the next four books in the series)has been translated into English for readers to enjoy worldwide—and all of it was inspired by an insult.

“Way back, I was reading abook by a Danish author called Little Lucifer,” recalls Andersen from his home in Copenhagen. “It's a completely different story, but of course it revolves around good and evil. But in that book, there is a scene with the main character where someone yells, ‘You're the devil's apprentice' and I thought it would be really cool to write about a kid who literally ends up as the devil’s apprentice, and make the storytake place in hell.”

Described as “an enjoyably disturbing supernatural tale” by Kirkus Reviews, the novel tells the story of a very nice, very lonely, and very unremarkable teenage boy named Philip, who—thanks to a teeny administrative error—accidentally finds himself in hell, where he’s expected to take over for a dying Lucifer. Unfortunately for the devil, Philip is an annoyingly good boy, which means teaching him to be bad is going to take an awful lot of hard (and hilariously fun) work.

So what happens when the devil has an angel for an apprentice and needs to bring out the devil in him?

Well, part of the answer comes from looking at Andersen’s creative version of hell. Drawing on biblical tomes, philosophy, and classic literature (Dante’s Inferno and the notion of “let the punishment fit the crime” are major influences on Andersen’s book), the world in The Devil’s Apprentice has all the typical characteristics of hell: fire, brimstone, punishing the wicked, and all kinds of demons. But it’s a completely different experience if you work there—or if you happen to be an accidental guest, like Philip. The result? Think: Harry Potter meets Good Omens. An oddly compelling and humorous combination of brimstone, old-world charm, and colorful characters that gives readers the sense of a very appealing (if disturbing) small town. Which was, of course, exactly Andersen’s intention.

“That was a point and a funny take on it: to look at hell—which is obviously someplace we all get as the [cruelest] of places—and try to turn it into a place where you might actually like to visit,” Andersen says with a light laugh. “It’s not nice to be a condemned soul and punished for all eternity, but the point was that these demons and devils are not cruel to each other. Because they have to have this society. You can’t have society with anarchy and people just being mean to each other. So of course it’s sort of like a community where they’ve got jobs and there’s homework, and people have to do dishes. It’s funny to look at hell that way.”

And thus The Devil’s Apprentice—which started as a single, one-off book—exploded into what will eventually be a six-book series (the final book will be released later this year) that appeals to middle-grade, young adult, and adult readers alike. For Andersen, the contrast of dark comedy against the age-old philosophical concepts of good and evil and choice all offered a temptation that he couldn’t resist, especially when it comes to the devil himself, who goes from being an object of fear to something very closely approaching a father figure.

And even kids, Andersen is quick to point out, have a much more advanced sense of good and evil—and what those concepts mean—than we often think they do.

“That was basically one of the things I wanted to do with the story,”says Andersen,“to try to make that argument that it’s all right that we’re not good, well-behaved, and nice all of the time. Because we can’t be. We’re not angels. So we have all these flaws in us, and that’s also OK.”

For Andersen, it comes down to how the choices we make shape who we become. In The Devil’s Apprentice, that moment comes when Philip discovers that for every human born, God and the devil roll dice to determine how much of their innate nature is good…or evil. And so Philip asks Lucifax, the devil's cat:

“Does that mean that evil people are evil because the Devil cast a good roll when they were born? Or because God cast a bad roll?"

The cat shook his head. “It’s not that simple. Some people are easier to tempt than others, but you can overcome your own nature.”

“And the higher the number the Devil rolls the harder it is?”

“Yes. And the easier it is for us to lure them into ruin. But that doesn’t change what’s essential: that evil people aren’t evil because my master cast well. They are evil because they’ve chosen to be.”

And anyone who disagrees with that…well, they can just go to the devil.