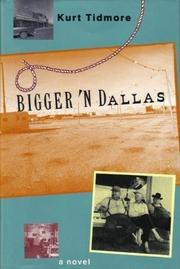 FICTION & LITERATURE
Released: June 1, 1991
BIGGER 'N DALLAS
by Kurt Tidmore
FICTION & LITERATURE
Released: June 1, 1991
BIGGER 'N DALLAS
by Kurt Tidmore
A pleasant, regional collection of interlinked sketches- -divided into 13 chapters—about small-town citizens of western Texas: at its best, a kind of prairie version of Ellen Gilchrist. Bigger 'N Dallas is a honky-tonk dance hall in Tyrone County (county seat Tyrone, pop. 2000), which is part of the Liano Estacado—a barren, endless prairie. Widower Spud Merton, owner of the honky-tonk, is a fishing aficionado; to his wife, Ethel, ``fishing was the rival she couldn't compete with.'' After the folksy introduction to Merton, the book settles into a largely predictable series of stories about men and women who are sometimes involved with one another: Lucinda Sue Ghertz has ``the sort of figure that made men turn to get a second look,'' but her left eye ``pointed always at the same spot, like a headlight.'' She returns from Denver, and her bleak life is refreshed only by an ex-hippie violin player. Her 17-year-old niece, Lucille Marie Wintergarten, has a one-month affair with a Mexican who works at her daddy's cotton gin; her daddy finds out and arranges to have the lover deported. Lucille's parents, Diane and Jerry, get their own chapters: Diane is a former cheerleader who feels like ``she'd dropped the baton of her life,'' and Jerry suspects his wife of an affair. Meanwhile, Leon Stoner, who runs the local liquor store after a long-ago artistic sojourn to Paris, has a one-night stand with Lucille, and Leon's father Roy, in a touching chapter, realizes that ``as a person gets older the circle around 'em draws in closer and closer, like a target disappearing down to the bull's-eye.'' Sad-sack figures out of country-music songs make themselves at home in Larry McMurtry country. Read full book review >