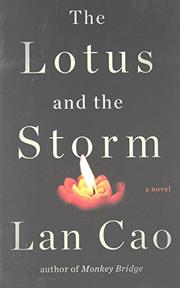 THE LOTUS AND THE STORM
by Lan Cao
"A novel that humanizes the war in a way that body counts and political analyses never will."
Written with acute psychological insight and poetic flair, this deeply moving novel illuminates the ravages of war as experienced by a South Vietnamese family. Read full book review > 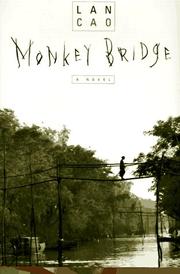 FICTION & LITERATURE
Released: July 1, 1997
MONKEY BRIDGE
by Lan Cao
FICTION & LITERATURE
Released: July 1, 1997
MONKEY BRIDGE
by Lan Cao
A wonderfully written but unengaging first novel about a young Vietnamese refugee who, in 1975, is airlifted from Saigon and only later learns of her family's dark past. Mai, whose family befriended Michael MacMahon, an American Colonel in Saigon, comes to the States as a 13-year-old. After staying with the MacMahons for six months, she moves to Washington, D.C, joined there by her widowed mother. The two make their home in ``Little Saigon,'' the years pass, Mai is soon fluent in English, and though mindful of her past—she nostalgically recalls traditional myths and customs—she adjusts to the new country. Her mother doesn't, though, and a bad fall, followed by a disabling stroke, seems to push her even further into the past. Mai hears her talk fretfully in her sleep of her father, Baba Quan, who was to accompany her to the US but never arrived at the agreed-upon rendezvous. Mai tries to contact him, but her mother is curiously discouraging. As Mai prepares to go to college, her mother seems happier, but the secret letters Mai finds her writing are less cheerful. While the letters at first retell old legends and beliefs and describe life in her native village, the last entries, her legacy to Mai, tell a darker and more complex story. Mai learns that her grandmother had been the landlord's concubine and he, not Baba Quan, was her grandfather; Baba Quan was actually a brutal, bitter man, and a Vietcong leader; moreover, her mother had been neglected by her intellectual husband and suffered many miscarriages. Convinced that she and the family have bad karma, Mai's mother acts—successfully—to free her daughter so that she may have a ``different heritage, an unburdened past.'' Heartfelt evocations of a different time and place aren't enough here to give vigor to a beautifully rendered but disappointingly lifeless story of the Vietnamese American experience (Author tour) Read full book review >