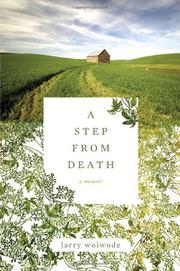 A STEP FROM DEATH: A MEMOIR
by Larry Woiwode
BIOGRAPHY & MEMOIR
Released: March 1, 2008

A STEP FROM DEATH: A MEMOIR
by Larry Woiwode
"Both elegant and elegiac—vintage Woiwode."
Poet and novelist Woiwode (My Dinner with Auden, 2007, etc.) ponders matters of life, death and what lies between. Read full book review > 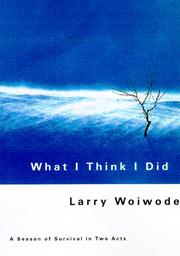 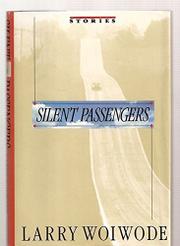 FICTION & LITERATURE
Released: Aug. 1, 1993
SILENT PASSENGERS: STORIES
by Larry Woiwode
FICTION & LITERATURE
Released: Aug. 1, 1993
SILENT PASSENGERS: STORIES
by Larry Woiwode
Ten stories treating instances of heightened memory and perception by men, usually fathers, as ordinary life goes on around them in the North Dakota, Montana, and northern plains, by masterful but inconsistent Woiwode (Indian Affairs, 1992, etc.). There is much here that's mawkish—and much that's emotionally clear and true. In ``Possession,'' the mawkish predominates: a sheep rancher whose toddler won't sleep irritably tries to imagine what the child might be afraid of, before it dawns on him that the boy's (rightly) afraid of the rancher's brooding, petty jealousy of the mother. In both ``Winter Insects'' and ``Blindness,'' men find themselves temporarily struck blind by a combination of overwork, heightened emotional sensitivity, and snowy, hazardous weather; each is brought to safety by his young daughter, but not before the author's use of the psychological motif of sight has been painfully belabored. And in ``Sleeping Over,'' a glimpse of a former lover's clothes drying on a line sets up a terrible longing in a midwestern boy whose future seems to be evaporating before his eyes; but the woman is so scantly characterized that it's hard for a reader to understand, much less empathize. In ``Owen's Father,'' though, Woiwode is closer to his best, subtly and brilliantly rendering the chilling effect on a young man of suddenly remembering childhood events, previously buried, shared with his dead father—including the days just before the father's suicide. Affecting memories also drive ``Black Winter,'' in which a 50-ish former philosophy professor who now lives on his grandfather's farm finds a new identity in pursuing his grandfather's old trade, and the beautiful (though slow-to-start) title story, in which a father comes to terms with the partial paralysis of his beloved nine-year-old son. The other entries here are sketches—a meditation on ``Confessionals'' and a rhapsody on oranges eaten during a 1940's childhood. A mixed bag—and rather downbeat. Read full book review > 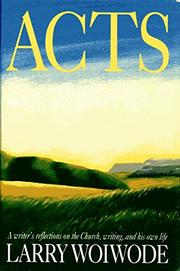 NON-FICTION
Released: May 1, 1993
ACTS
by Larry Woiwode
NON-FICTION
Released: May 1, 1993
ACTS
by Larry Woiwode
Courageous but flawed attempt by Woiwode (Indian Affairs, 1992, etc.) to examine Christian culture and his own faith in the light of Acts, ``the most overtly narrative book of the New Testament.'' Woiwode's grit lies in his willingness to discuss Christianity despite—as he hammers home—the bias against religion among America's cultural and academic elite. He ponders the task of the Christian writer and finds it, as did Dante, Tolstoy, and Eliot before him, to be a search for ``a way to live the life Christ calls us to live.'' The best compass here, says Woiwode, remains the Bible. Thus his interest in Acts, toward which he takes a Protestant approach (Woiwode is an rthodox Presbyterian), paring away doctrines that he sees as excrescences to get at the unvarnished revelation. His technique, a combination of common sense and writerly savvy that ignores biblical scholarship, gets him into trouble at times. For instance, while it's charming and even instructive to call Peter's account of Judas's suicide ``an elaboration, in a sophisticated accreting manner that would please a Robbe-Grillet,'' it's naive to believe that the numbers in Acts (e.g., 40 days as the span of Jesus' post-Resurrection appearances) must be literally true because, as Woiwode claims, Luke has a novelist's eye for factual detail: Such literalism ignores the different aims and methods of modern and ancient writers. Similar exegetic goofs pepper the text, but no matter; far more exciting is Woiwode's ability to connect the ancient dramas of Acts to modern life. In so doing, he plucks away at the nature of sin, baptism, miracle, and other issues, and tells of his own religious conversion and return to the land, always in the same shimmering prose that marks his fiction (``I pressed a footpedal that released a pyramid of fifteen finished bales, outlined white-gold in a sudden gate of sun''). Pretty shaky as scholarship—but a tough, moving personal testament. Read full book review > 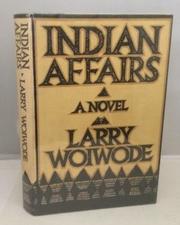 FICTION & LITERATURE
Released: June 1, 1992
INDIAN AFFAIRS
by Larry Woiwode
FICTION & LITERATURE
Released: June 1, 1992
INDIAN AFFAIRS
by Larry Woiwode
This sequel to Woiwode's first novel (What I'm Going To Do, I Think, 1969) about a honeymooning couple in northern Michigan shows Chris and Ellen back there seven years later, dealing with marital problems and with menacing strangers. Their biggest problem by far is their childless marriage (Ellen's miscarriage was reported at the end of the earlier novel). Her secret reason for being in this cabin on her grandparents' land in the dead of winter is to write a journal about that lost child, and so assuage her guilt. Chris, too, is here to write; his dissertation on the poet Roethke's journey toward the animism of Indian culture will, he hopes, make his own purposes clearer. For Chris is part Indian; though he ``wanted to pass,'' and has succeeded, he now feels his Indian heritage asserting itself. Meanwhile, there are less psychic matters demanding attention. A broken pump needs fixing; a prowler is lurking in the woods; and some Indian kids, young punks, keep pestering Chris to buy beer for them. Add to that list prejudiced bartenders in town; a teenage arsonist roaming the countryside; an aggrieved Indian who mistakenly thinks Chris shot at his wife at the town dump...well, it all makes for a busy life. What it doesn't make for is an engaging novel, for mostly Woiwode is just crying wolf (that prowler, for example, is not unmasked until the final pages), and all these nuisances throw the novel out of whack, distracting us from the serious business of Chris and Ellen trying to break free from their pasts (a cruel father in Chris's case, a sinister grandmother in Ellen's). The result? An unworkable combination of the identity-crisis novel and the city-slickers-surrounded-by- hostile-rubes genre, delivered in prose that is all thistles and thorns. A sad fumble by this major American writer. Read full book review >