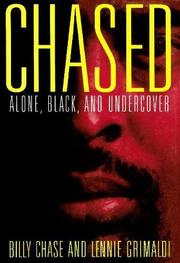 BIOGRAPHY & MEMOIR
Released: March 1, 1994
CHASED: ALONE, BLACK, AND UNDERCOVER
by Billy Chase, Lennie Grimaldi
BIOGRAPHY & MEMOIR
Released: March 1, 1994
CHASED: ALONE, BLACK, AND UNDERCOVER
by Billy Chase, Lennie Grimaldi
The melodramatic saga of Connecticut narcotics agent Chase, who infiltrated drug gangs from street dealers to the Gambino crime family. Chase recalls going to a 1981 pickup basketball game and stumbling onto the murder scene of Frank ``Cigars'' Piccolo, ``the most powerful mobster'' in the state. From then on, for reasons never made clear, ``the mafia'' became ``his ultimate goal.'' He left his job with the Department of Corrections; became a policeman in rural Monroe and, in 1984, joined a Bridgeport police department rife with corruption and dissension (there's a great deal about this, though it never really has an impact on Chase's story). He wanted to be in the vice division, he says, so he could ``do Miami Vice shit.'' During his early days, he went undercover at the city sewage treatment plant to investigate employees, infiltrated the staff of the Bridgeport Post and then did the same for the Dicks family—allegedly in control of the local heroin market for John Gotti's brother, Gene. (Chase, a former high-school basketball star, is somehow never identified as an undercover policeman in his medium-sized hometown.) Named to the statewide Narcotics Task Force, Chase infiltrated Colombian, Jamaican, and Puerto Rican gangs and, once, found himself the lone black man at a Mafia stag party, where ``me with high-flying gestures discussed low-down deals.'' His success in bringing ``drug kingpins''—all of them apparently willing to do ``hand-to-hand'' deals at fast-food restaurants—brought him little good. Following serious injuries, death threats, nightmares, and a brutal beating at the hands of a suspected crack dealer, Chase retired with disability and is living in hiding. He has appealed to authorities to provide retired undercover cops new lives similar to those in witness protection programs. Serious, intriguing stuff rendered trite with hyperbole and tough-guy talk. Read full book review >