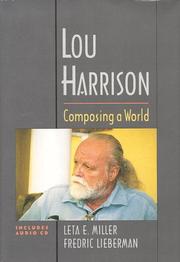 BIOGRAPHY & MEMOIR
Released: July 1, 1998
LOU HARRISON: COMPOSING A WORLD
by Leta E. Miller, Fredric Lieberman
BIOGRAPHY & MEMOIR
Released: July 1, 1998
LOU HARRISON: COMPOSING A WORLD
by Leta E. Miller, Fredric Lieberman
That this biographical study of composer, polymath, and activist Lou Harrison began as an oral history explains a lot; its cozy tone betrays long exposure not only to octogenarian Harrison himself, but also the dizzying orbit of progressive artists, musical and otherwise, with whom he has come into contact over a long and diverse career. The authors, a musicologist/performer and ethnomusicologist/composer, respectively, do bring marked insight to the occasionally bewildering universe Harrison inhabits, devoting separate chapters to their subject's researches into, and utilizations of, tonality, instrumentation, and tuning, among other nuts and bolts of musical process that this composer has drastically reconsidered. Harrison's complex relationship with East Asian music is likewise treated at length, with particular emphasis on his works written for gamelan, of which the variable intonation would become for him a source of fascinated inspiration. With respect to extramusical issues—essential where Harrison is concerned—the authors weave the voices of their many sources to fine effect, finding continuity in his travails and accomplishments on both coasts and exploring the composer's crucial decision to return to a culturally (and sexually) vibrant California in 1953. The freedoms he encountered there are not only to be found in Harrison's music—they include a surprisingly sober chapter decoding gay "markers" in his oeuvre—but are evinced, the authors would seem to inply, in the very ubiquity of the music itself. If, then, one can move below the current of obsequy that runs throughout the book, there is much strong scholarship to be found; the authors— appreciation of the many formal risks that underlie Harrison's eclecticism, as of the deep humanity that drives it, allows for an unusually clear portrait of an artist whose restless pursuit of beauty has driven him from medium to medium, most often beyond the public eye. (20 b&w illustrations, not seen; CD included) Read full book review >