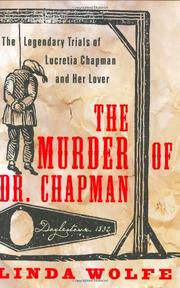 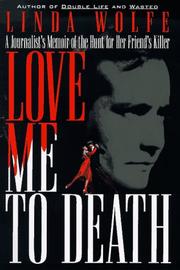 BIOGRAPHY & MEMOIR
Released: Feb. 1, 1998
LOVE ME TO DEATH: A JOURNALIST'S MEMOIR OF THE HUNT FOR HER FRIEND'S KILLER
by Linda Wolfe
BIOGRAPHY & MEMOIR
Released: Feb. 1, 1998
LOVE ME TO DEATH: A JOURNALIST'S MEMOIR OF THE HUNT FOR HER FRIEND'S KILLER
by Linda Wolfe
Wolfe, who has written about men's hostile and violent acts against women in Double Life (1994) and Wasted (1989), now investigates the death of an acquaintance of hers. Jacqui Bernard was a kind-hearted older woman who met a young man one night in 1983 at a Manhattan bar. She befriended him, loaning him cash and her car, until she became suspicious of his motives. Soon, Jacqui was found strangled in her apartment. Police investigators connected her death to Richard Caputo, a good-looking Latino who had a gift for seducing wealthy women and had already confessed to killing one girlfriend in 1971. Caputo—who by his wife's accounts was gentle—seems to have responded to rejection with violence and was extremely jealous. He also seemed to fear female sexuality: Both of the women he had long-term relationships with were virgins when he met them, while the lovers he killed were more sexually active. After confessing to the 1971 murder, Caputo was committed to a hospital for the criminally insane and there he seduced his psychologist, Judith Becker. Caputo told Becker his crime was the result of early abuse and Becker believed him, eventually taking him home with her. When Becker tried to end the relationship, he killed her too and stole her wallet and car keys. He fled and killed several other young women, and in 1983 met up with Bernard. In 1994 he finally turned himself in for the Becker murder. Wolfe does a capable job of tracing Caputo's murders and makes a compelling case that he did kill Bernard (he denies it). But she does not dig much deeper than a short dissection of Caputo's m.o., and meaningful psychological insight is absent. A thin book, short on analysis and detail, and, as the subtitle indicates, more about Wolfe's investigation itself than Caputo's crimes. (8 pages b&w photos, not seen) Read full book review >

BIOGRAPHY & MEMOIR
Released: Sept. 1, 1994
DOUBLE LIFE: THE SHATTERING AFFAIR BETWEEN CHIEF JUDGE SOL WACHTLER AND SOCIALITE JOY SILVERMAN
by Linda Wolfe
BIOGRAPHY & MEMOIR
Released: Sept. 1, 1994
DOUBLE LIFE: THE SHATTERING AFFAIR BETWEEN CHIEF JUDGE SOL WACHTLER AND SOCIALITE JOY SILVERMAN
by Linda Wolfe
Both more and less than you wanted to know about the scandalous downfall of the chief judge of New York State's Court of Appeals. How did the highly respected Sol Wachtler wind up convicted in 1993 of plotting a vulgar extortion scheme against his former mistress, Republican Party fundraiser Joy Silverman? Wolfe (Wasted, 1989) strings together a lot of sordid and unanalyzed facts, failing to satisfactorily answer this troubling question. In a cool, simplistic narrative, she sketches the life of Silverman- -abandoned by her natural father, both despised and sexually molested by her stepfather, a jewel-obsessed siren who used and discarded men on her climb up the social ladder; and of Wachtler- -charismatic and ambitious wonder boy of the New York State Republican Party, an emotionally vacuous man who, after his first electoral failure, ``learned...how to wear a mask.'' Restless on the bench, desperate for attention, and apparently sexually naive, he was ripe for picking by his wife's stepcousin Silverman, and devastated when the affair ended. Silverman (who, unlike Wachtler, declined to be interviewed for this book) emerges as a caricature of a caricature—the nightmare JAP from hell. (On moving to St. Petersburg, Fla., with her first husband, she reportedly asked, ``Where can you shop here?'') In portraying Wachtler and Silverman and others in their circle, Wolfe settles for facile prose (``earrings...shone on her ears like beacons'') and characterizations (``She refused to let his confession crush her...she'd always had a strong ego''). And she doesn't shed light on how Wachtler was able to function effectively as a judge while suffering from what his psychiatrist said was a drug-induced mania (from Tenuate, Pamelor, Halcion, and other drugs). Likewise, she offers scant evidence for her conclusion that Wachtler ``spent his life concealing, perhaps even from himself, that his nature contained a dark as well as a bright side.'' Wolfe reduces an electrifying tale of power and disgrace into a lifeless narrative, and compelling figures into straw men. (Frist serial to Vanity Fair; Literary Guild selection) Read full book review >