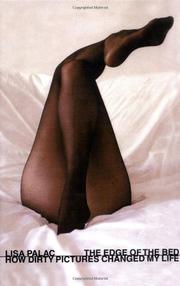 BIOGRAPHY & MEMOIR
Released: May 6, 1998
THE EDGE OF THE BED: HOW DIRTY PICTURES CHANGED MY LIFE
by Lisa Palac
BIOGRAPHY & MEMOIR
Released: May 6, 1998
THE EDGE OF THE BED: HOW DIRTY PICTURES CHANGED MY LIFE
by Lisa Palac
A clear-headed look at some of the most explosive sexual issues of our day—pornography, cybersex, freedom of sexual expression, marriage—through an autobiographical lens. Palac, like her close friend and mentor Susie Bright, has been one of the foremost pop critics of the American sexual landscape—and of repressive tendencies in feminism. This book, part autobiography, part cultural analysis, shows off her lively writing and wacky sensibility. She describes her introduction to vibrators (she was cleaning out a closet, and one fell on her head; later she used it to masturbate to orgasm for the first time); her sexually repressive childhood (Catholic, though she's careful not to make too much of this too-worn theme); the boyfriend who introduced her to the joys of pornography (despite her hard-core feminist opposition); her quest to create erotic material that reflects women's desires—as a fiction writer, editor of the lesbian sex magazine On Our Backs, and founding editor of Future Sex magazine, a weirdly technologically oriented porn magazine; and her own adventures in S/M, E-mail and phone sex, love, and weddings (first as minister, then as bride). The author's story concludes with her marrying the man she loves, and she unfortunately ends up by too easily brushing off issues she's courageously raised (notably, how does someone raised to believe in sin, and in salvation through suffering come to grips with eros) simply because she herself has resolved them. And though the book is engaging throughout, it isn't focused enough to be a memoir, and, at only 34, Palac hasn't lived long enough to write a really satisfying autobiography. It would have made more sense to organize her material by topic rather than by the chronology of her life Still, Palac's approach to sexual politics and to her own life is infectiously spirited. (8 pages photos, not seen) Read full book review >