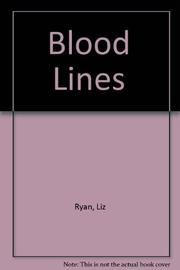 Released: Jan. 1, 1996
BLOOD LINES
by Liz Ryan
Released: Jan. 1, 1996
BLOOD LINES
by Liz Ryan
An overambitious, distractingly dense, but nonetheless engaging first novel from Dublin Evening Herald journalist Ryan. Everyone starts out in the wrong marriage in this quirky Irish saga that opens in the tumultuous 1960s: Even patriarch and racehorse trainer Eamonn Laraghy must keep his trysts with Helen Craigie a secret for decades, though his icy wife Maeve wouldn't deny her desire to keep their marriage strictly business. Their children, twins Kerry (due to take over Ashamber, the family estate) and Brian, a fashion designer by calling, make bad choices, too: Kerry disdains her inheritance and runs off to Africa with wandering musician Darragh deBruin, and Brian's pressured into an early Parisian marriage by the lovely yet controlling Lucienne de Veurlay. When Eamonn and Maeve are killed unexpectedly by the IRA, Kerry returns home to Ashamber with infant son Killian—a child she can't love, it seems, because he reminds her of his father, who was a self-centered and abusive disappointment. The spotlight is on Kerry throughout, as she eventually thaws to Brian, with whom she's been estranged, and to Killian, who's desperate for her affection; and as she relates to Helen, whom she meets and even hires after Eamonn's death; and to Brandon Lawrence, the older man who's loved her since she was 18 but who's been trapped in a loveless marriage. The surrounding cast of characters—including Kerry's best friend, Yves, who's gay and eventually contracts AIDS, and Zoe, also a fashion designer, who's in love with married Brian—command formidable attention. Ultimately, the whole incongruous gang is brought together for an unlikely Tahitian vacation that casts a soothing if gauzy net over any remaining shaky plot turns. Ryan's easy style and journalistic gift for detail conceal a multitude of narrative shortcuts and indulgences that could terminally weaken a lesser entertainment. Read full book review >